And so to Woolworths and to cabernet sauvignon in my quest for wine under R100. Wine, that is, that we fussy types would find enjoyably drinkable or even better than that. Woolworths has a high reputation for its wines, most of them subtly exclusive brands – often prominently bearing the name of the producer estate/winery, but on the back-label pointing out that it’s solely a Woolworths bottling. More than that, frequently mentioning that Allan Mullins, “Woolworths’ Cape Wine Master”, had had a hand in blending it. Allan has been doing this to great acclaim for as long as many of us can remember. He’s held in esteem and affection by producers too – though I suspect his department drives pretty hard bargains on behalf of Woolworth’s generally well-heeled customers, who, it would seem from looking around, have no qualms about buying a slab of tuna or salmon for a few hundred bucks but are somewhat meaner when it comes to wine.

So I arrived with some hope for quality cabernet sauvignon under R100, but pretty sure that there wouldn’t be the spread and depth of it that I and a number of readers, generously sharing the names of their favourites, found in Chenin Blanc last week.

There is, in fact, a lot of cab around the Cape – it’s in third place, just behind Colombard, both of them a good way after Chenin, in terms of hectarage planted, but much of it in areas not particularly well suited to it. Who’d have easily guessed, for example, that until recently there was more cab planted in the Swartland than syrah? And that the Breede River Valley has (just) more planted than Stellenbosch? Even if cabernet is rather more tolerant of circumstances than most great varieties, including big yields, it prefers to be away from marked heat and dryness.

Of the three bottles I selected, all were from prestigious producers and exclusive to Woolworths, all were sealed with corks (two of them Diam conglomerates), each was from a different vintage. Only one declared an origin smaller than the Coastal region. Two sold for R85, one for R90 (less 1c in each case – such irritating pricing; do they really think us such fools?). I’ll deal with these in alphabetical order, but first I should mention that one can get a cheaper cab than this at Woolworths (why is it that it seems to be mostly women who refer to it as Woolies?). But do so with trepidation if the Longmarket (from Weltevrede; R60) is typical of the approach down that end of the shelf: it’s not exactly horrible, but sweetish and spineless – not the sort of thing our family favours, dear. 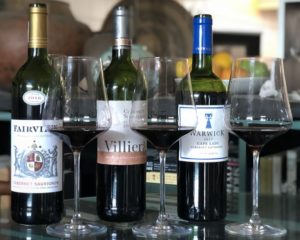 But the three wines in question impressed me as good value for money and very acceptable. I was even a little surprised as well as impressed. The Coastal Region Fairview 2016 was the one I most enjoyed, as it’s got the firmest tannic structure, the most cedar-savoury character and has the closest to a properly dry finish. Things that I prefer. Balanced and drinkable now, with not much depth to it, but there’s no hurry to drink it up and it might well harmonise those slightly austere but lip-smacking tannins in a few years.

Villiera 2015 is the blackcurrant-fruitiest of the trio, but not vulgarly so, with a reasonable structure and a rather charming light elegance. WO Stellenbosch, but nothing distinctive about it insofar as regionality goes. I think this is what it is, and it might be at its best now. Interestingly, Platter gives this wine 4 stars, half more than the Fairview (different tasters scoring), but I would swop those scores around, myself.

The third wine I should perhaps have highmindedly avoided, as it’s from Warwick, which is owned by the owners of this website. It’s the Cape Lady 2017 and it would have been hard to guess that it’s two years younger than the Fairview, given its easy approachability. Closer to the Villiera in style, then, but still with some youthful firmness of tannin and so a touch more serious. No great intensity of course, but a lightish freshness that is appealing; a little sweetness of effect that is less so.

My oven is sneaking duck aromas to me as I write. All these three are worth persisting with, but I suspect the level in the Fairview bottle will have sunk the most by the end of my dinner.