Tim James: Four Horsemen of the Apocalypse ride in 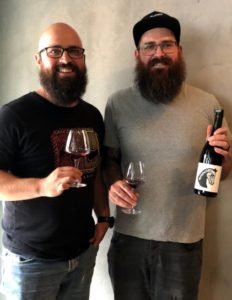 Death, Famine, War, and Conquest are not immediately cheerful concepts – and not names that your average drinker would happily find on winelabels. So, having decided to invoke the four horsemen  of the biblical Apocalypse for their new range of wines, Tremayne Smith and Jaco Engelbrecht have concentrated on the colours of the horses rather than the, well, apocalyptical  associations (see the book of Revelations, if you care to – it’s not likely to make you much the wiser, I suspect). Actually, the guys both tend more to the Old Testament than the New in appearance, given the splendid beards they sport – but perhaps they’re just trying to make Adi Badenhorst seem inadequate in his emulation of Paul Kruger’s fundamentalist facial decor.

Jaco and Tremayne have been good friends since their time together studying at Elsenburg, though they’ve specialised in different aspect of wine-growing. Viticulturist Jaco was recently with the Old Vines Project but is now consulting more widely, including for Eben Sadie (and Tremayne); Tremayne, after a stint at Mullineux, is winemaker at Fable and also has his own range of strictly minimal-intervention wines under the Blacksmith label. Some of the existing Blacksmith wines also, now that I think of it, have rather lurid names and imagery – though the skull-and-crossbones stuff presumably attracts other wine-loving heavy-metal fans. Looking at the strong monochrome style of the labels, it’s not surprising to learn that the designer is the tattoo-artist who also decorates selected bits of Tremayne himself.

The new Horsemen range is broadly associated with The Blacksmith more than just visually, but is more of a full collaboration, including ownership, between Jaco and Tremayne. Each tends to his own specialty, however, with Jaco tending the vines, but able to get closer to the actual wines than usual, and Tremayne doing the vinification in the Fable cellar in Tulbagh.

I can’t pretend to understand the significance of the relevant biblical prophecies, but for Jaco and Tremayne there seems to be something about establishing balance (even through violence), and the Horsemen range is particularly focused on sustainability, especially efficient vine utilisation of water in face of the threats of climate change and therefore concentrating on particularly suitable varieties.

All the maiden releases are from 2018, all naturally and wholebunch fermented and made without additives, and matured in old oak. The two whites are both from what sound like really interesting chenin vineyards. The Black Rider is from a young one on a ridge of rocky broken slate in Philadelphia – between Swartland and Durbanville – designed by Jaco. Appropriately, the wine is mineral and flinty, though not short on stonefruit, with remarkable depth and character for a maiden harvest. White Rider is from much older dryland, terraced bushvines in Paarl – a neglected and now rejuvenated vineyard that hadn’t been harvested for ten years. This is a notably riper, richer wine, evoking golden grapes, with a note of real concentrated fruit sweetness, but with adequate acid balance; by a long way the most alcoholic of the wines at 14%.  Both whites should retail for around R200, with the reds R20-30 more; fair prices as things go these days for wines of this type and quality.

Both reds are from Darling bushvines. Red Rider is a lightly spicy carignan – a pleasant, fresh wine, with flavour and structure, but I fear it still doesn’t bring me closer to being convinced that this is a grape that anyone should bother with much; for me it has an inherent insipidity. Grenache, on the other hand, is doing marvellously well in the Cape for this style of unwoody, fresh wine, harmonious and delicious in youth but with the structure to age with character. Such is the elegant and firmly grippy Pale Rider. As with all Tremayne’s wines, there’s a notable loveliness of silky texture. Happily there’s no need to think of violence and destruction, and plenty of opportunity for enjoyment.

Some new wines in the Blacksmith range have also been released alongside these. I’ll write about them shortly.