Tim James: Highs and Lows of the Swartland Heritage Festival 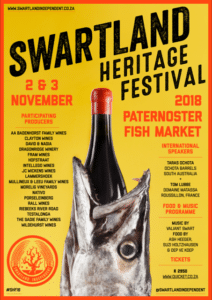 The Swartland Heritage Festival, organised by the dynamic Swartland Independent Producers organisation, was held in the seaside village of Paternoster last Friday and Saturday – lingering into the early hours of Sunday for some harder-partying people than me. Much good drinking was done, and some serious, thoughtful tasting; much conviviality enjoyed (I wouldn’t have liked to have been alone there, though). And good eating? Unfortunately not: the food was generally poor, its distribution on Friday night was appallingly planned, and Saturday lunch was miserable and woefully inadequate – ameliorated by the organisers raiding the local pizzeria for pizzas and the shops for material to make sandwiches for the punters (who’d paid nearly R3000 each for their 24 hours’ entertainment). Prime blame must go to Cape Town chef Ash Heeger (seen having a drink in the hotel bar while those sandwiches were being frantically prepared by volunteers); but the organisers must take their share.

The rest of the Festival was pretty good – and perhaps it was mostly the catering problems that made me feel it lacked the panache of the famous Swartland Revolution which was its predecessor; the experience also seemed a little sparse, unfocused and unexciting by comparison (I attended all the Revolutions in Riebeek-Kasteel, but I missed the first Heritage Festival last year).

Apart from the chance on Saturday afternoon to tastes wines from participating members of SIP, there were three formal seminar-tastings – held under canvas on the edge of the beach, with splendid views between the guy-ropes. The first featured six wines from Matassa, the Languedoc winery of Tom Lubbe. Tom’s wine roots are in the Swartland, most notably his few years at his Observatory winery on the Paardeberg, where the fresh, early picked character of his wines was (especially retrospectively) a significant influence on the nascent wine revolution. In his years in France he’s become increasingly associated with the “natural wine” movement. Perhaps unfortunately (but significantly?) he spoke at great length about his philosophy, especially with regard to strictly organic farming, much more than about the wines: three skin contact whites (“orange wines”), and three reds. All predictably low in alcohol, all a touch too austere and hard work for my tastes. Some people I spoke to preferred the whites, others the reds, but it was largely the committed “natural” winemakers who claimed to really appreciate the wines. My poll was tiny, but it had seemed to me when I glanced around that very few of the tasting samples had been actually drunk; mine certainly not.

The pleasure level leaped the next day. In the first Saturday tasting, the Swartland was represented by Donovan Rall (the magnificent Rall Ava Chenin); Jurgen Gouws (Elementis skin contact chenin – a fresh, joyously delicious orange contrast to the Matassas, and his modest, light but flavourful red Kedungu); Jasper Wickens (also the Badenhorst winemaker, destined to be a really important Swartland player with his own Swerwer label, I’m convinced; here his rather more serious Red blend and a Chenin that would have seemed even better if not placed so close to the Rall version, next to which most would have paled); and Kallie Louw of Porseleinberg, who offered his imposingly fine and still youthful 2010. Altogether a splendid expression of the exciting diversity of modern Swartland winemaking. And if the seminar focus on “the way forward” wasn’t really well enough developed, the winemakers must be congratulated on not too often being diverted into silly jokiness by the moderator.

Then the marvellously hippie-looking Taras Ochota (dreadlock topknot and all) from Ochota Barrels in South Australia showed how far at least some Australian producers have moved from the “sunshine in a bottle (with oak and extract and sugar)” model. Again, six light, fresh and vibrant wines that weren’t mired in theory but firmly located in the realm of sensual pleasure. Taras spoke entertainingly and expressively (well supported by moderator David Clark). He winningly mentioned at one point that he avoided portentousness by remembering that “You’re just making a drink, dickhead!”. Poor Tom Lubbe seems to feel that he needs to save the earth, as well as revolutionize its winemaking, one bottle at a time.

A good time, then, on the whole. I was left on Sunday, though, with a nagging doubt that went beyond my preference for having a wine festival in a genuine wine-town like Riebeek-Kasteel rather than an upmarket holiday village. The old Swartland Revolution had struck an excellent balance in its tastings between classic greatness and the avant-garde. Unfortunately (in my opinion) the SIP Festival seems fixated with hipster winemaking – giving none of the relevant context of, for example, the great Loire (chenin blanc) and Rhône (syrah, grenache) producers who were hosted at the Revolution. A real concern, of course, is that this reflects a narrowness of experience and interest of the current organisers. I hope not; it would not bode well for the future – and in fact most of the SIP winemakers are not over-geeky fundamentalists. The greatness of the Swartland and Cape wine revolution (lowercase R) was that it was based on an understanding and respect for the European classics. And the excitement of the Swartland Revolution (uppercase R) was predicated, I would argue, on illustrating for its audience the fertile, dialectical inter-relationships of establishment and avant-garde. When it’s only look-alikes from Roussillon and Adelaide Hills Basket Range who’re invited to bring their wines to show us, there’s a real danger of it all becoming a rather sterile, self-satisfied wank.