Tim James: History of grape varieties in the Cape

A question about the identity of a grape variety emerged from Joanne Gibson’s latest article on winemaking in the early Cape and I commented that the “Persian” vines referred to couldn’t be shiraz in my opinion. It made me think that a quick sketch of the pre-20th century history of grape varieties in  the Cape might be a good idea – especially as many readers of this website seem to have a taste for learning about the past of the South African wine industry. 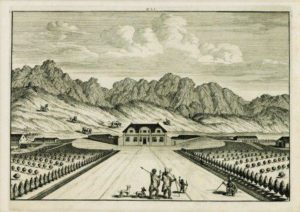 A sketch – a mere and even vague sketch – is what it has to be with regard to that period, and not only because my research has not been deep. Viticulture was not much of a science in those days; nor were winedrinkers much concerned about different grape varieties as such. We must rely a good deal on the written records of commentators for what understanding we can glean. In my comment on Joanne’s piece I quoted one of them, the Dutch traveller Francois Valentijn, reporting on grape varieties he noted at the turn of the 18th century at Vergelegen: “Frontignan, Russelaar, Pottebakker, and a Persian long white variety as well as varieties from Avignon, Champagne and Burgundy”. Now, Frontignan is familiar, as one of the earliest varieties in the Cape. But we’re not helped by the other references and much the same goes for many other early accounts – many of which are more than a little bewildering when it comes to this matter.

The earliest varieties successfully grown here were muscadel, steen (chenin blanc) and hanepoot (muscat d’Alexandrie – presumed to be the “Spanish grape” referred to by Van Riebeek). As described in J van Rensburg’s 1954 Stellenbosch University MA thesis about winegrowing in the first 100 years of the settlement, there were attempts to diversify the varieties grown, especially on the “model farms” of the two van der Stels, Vergelegen and Constantia – hence Valentijn’s rather long (albeit vague) list. Later, the reported lists of varieties became much shorter, suggesting that the earlier array of varieties constituted, to a significant extent, experiments and trials.

As viticulture spread during the 18th century – or consolidated, really, as it could never spread far from the Cape Town market because of poor communications – the number of varieties clearly reduced. Groendruif (as semillon was known) had early become important – probably even before Simon van der Stel’s time, as had pontac and fransdruif (palomino). Marketed wines were not associated with specific varieties, however (although the different kinds and colours of famous Constantia did imply careful associations here). Rather (again Constantia being different, as it was in most regards), fanciful and over-hopeful allusions were made to the famous wines of Europe: most local stuff was given such names as Mallaga, Vintint, Moselle, Vin de Grave, Rheinwein and, above all, Madeira.

It seems clear that the overwhelmingly greater part of Cape wine was from white varieties. A government official in 1778 did some research and found that the it was mostly made from groendruif (semillon, remember), also from pontac, red and white muscadel, and steen. But it appears that farmers were already busy replacing pontac and steen with groendruif – a more productive grape, and more resistant to pests and disease.

The trend towards groendruif continued apace in the early 19th century, with the large expansion in production that followed the British takeover of the Cape Colony from the Dutch. According to what we must accept as reliable calculations and observations made in 1821, by this time groendruif commanded over 93% of plantings, out of “really no more than eleven distinct species of vines”. Next came muscadel, then hanepoot (though apparently little used for wine), pontac, steen, and then six unnamed others. Groendruif occurred by this time in both red- and white-skinned versions (both producing white wine).

Incidentally, referring back to my earlier note about the dubiousness of most observers’ knowledge of grape varieties, we can note that this author describes pontac as “the same as the cote rotie of the Rhone [ie syrah], the pontac of Guienne [Bordeaux, presumably] … and the port grape of the Douro” – which covers rather too many bases to be convincing!

Later in the century, in 1885, the new government viticulturist, Baron von Babo, reported that greengrape was still the commonest variety, that the “Stein Grape” was “not common but can be a high yielder”, that muscadel was still important, and that “‘of the dark grapes the Pontac is the most valuable”.

That really is the end of what we could consider the pre-history of modern Cape viticulture and the grape varieties it used. The year after von Babo’s report, phylloxera was discovered in a Mowbray vineyard and was soon devastating the Cape’s vines. Meanwhile, better informed understanding and advice was emerging from the government model farm at Groot Constantia in the last decades of the century, important new varieties were being brought in, and plantings were to change drastically as farmers slowly replaced their vines with new ones on rootstocks. We hear for the first time of grapes like cabernet sauvignon, sauvignon blanc, shiraz and cinsaut.

Trouble aplenty lay ahead for the Cape wine industry, but at least the vineyards were being more consciously planned.