I had intended this week to have a look at sub-R100 foreign white wines. But the weather in Cape Town has turned so autumnal, even wintry, that I then shuddered at the idea of wines from the fridge. (It’s not just Cape Town – all the Winelands are being threatened with more coolness and rain for the next few days at least. Great for the exhausted vineyards of those who’ve picked, but pity any poor farmers with grapes still on the vines – cabernet sauvignon most likely, in cooler spots or virused, struggling to attain ripeness. A difficult harvest it is being for many, starting off with uneven development in many parts, and many vines still suffering the effects of drought.) 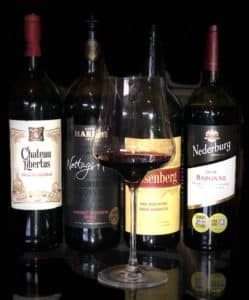 Do these “icons” pass muster?

So no white wines. Standing irresolute in front of the Checkers red-wine shelves, I noticed the so-familiar Tassenberg label. Mightn’t it be interesting to compare a few long-time low-priced classics – icons, even, of good value? I thought so and found good comparisons (and could have found them on many supermarkets or big retail chain shelves) in two other big-volume wines: Chateau Libertas, around since 1932, so older than Tassies by four years; and Nederburg Baronne, a mere babe by comparison, having been born in 1973. And just for fun, though it was a bit more expensive, an Australian: Hardy’s Nottage Hill Cabernet Sauvignon-Shiraz – around since 1967, so also in the venerable league, although not (as Aussie local distributor David Clarke pointed out to me) as “culturally relevant” as Chateau Lib and Tassies especially.

Actually, the thing I found most fascinating of all in this little tasting is that the Nottage Hill has a back-label saying that the wine was “produced in Australia and bottled in the United Kingdom”. I did a bit of simple googling and arithmetic to calculate that the wine thus travelled some 40 000 kilometres in container and bottle before ending up on my Plumstead table. Absurd. The locals possibly travelled 39 900 km less.

I wondered if I should try them out of Paris goblets or even tumblers, but no, they got my usual second-best Gabriels.

The pleasure of Tassenberg Dry Red Blend (non-vintage; R35) is in its sheer unpretentiousness, from the good old ugly label onwards. It’s simple and easy but not dumbed down (in fact it comes across as the driest of these four) and is perfectly pleasant, balanced, with a modicum of grip. Nothing to dislike and more than enough to enjoy. Excellent value.

I would choose to drink the screwcapped Tassenberg rather than the more expensive cork-closed Chateau Libertas Classic Dry Red Blend 2017 (R60) and Baronne (R70), basically for that naked unpretentiousness. The other two are probably better wines in some ways, with more obvious fruit depth, but not in others – and it’s the riper richness and obvious sweetness on the finish that stops me enjoying them. Tassies is poor but honest; these others are decent of their type, but that type is rather vulgar and ingratiating. In essence, Chateau Lib and Baronne are similar: soft, with a hint of grip, partly from a slightly stand-apart acidity. If I had to choose between them, I’d go for Baronne.

Nottage Hill Cab-Shiraz is very deft. This bottling is 2015 (well, it’s travelled a long way) so the wine has the benefit of time in bottle and has enough guts to have used it well to round out and acquire a good tinge of savouriness. At R85, it’s that much pricier than the two smarter South African labels and, frankly, though I hate to admit it, it is worth the extra R15. Nothing astounding, and in a related style, but the extra years have added harmony as well as the developed savoury note, and it’s less sweet than those Cape wines and has rather more structure to it.

But really, here’s a toast to reliable old Tassies. One could do worse at twice or three times the price.

Some wineries go through troubled times, with much chopping and changing, before they settle down with an established wine aesthetic and – often it seems to be the vital element...