Tim James: How best to think about “natural wine”?

I realised I should say a little more about “natural wine” than I did in my last piece, in which I was mostly concerned to draw attention to the “unnaturalness” of complex blending of wines (always  acceptable and often greatly welcomed though the practice might be). Wine distributor David Clarke (with an E), for example, worried that I might be suggesting that some natural winemakers might really think that they are making wine “as it would be without human interference”. I wasn’t intending to imply that any sane person would think that; rather, merely indicating one end of a non-natural continuum on which all wine is produced – with fully industrialised vineyard and cellar practices at the other extreme.

There certainly are extremists/fundamentalists in the natural wine movement who don’t like shades of grey. David Clarke had suggested I look for definitions at, amongst others, a website called morethanorganic.com, which is “dedicated to promoting French natural wine in the English-speaking world”. While all natural wines must be organic, it says, they must also be “made in the most natural possible way”. The website’s author, one Pierre Jancou, “passionately believe[s] that non-interventionist winemaking produces the healthiest, best tasting, and most distinctive wine” (move over most of the recognised great wines of the world). He does at one point suggest that there is a scale, with natural wine at one end and “mass produced and chemically manipulated” wine at the other. But he also, as the previous quote intimates, seems convinced of a radical divide between natural wines, which “taste of the grapes from which they are made and the place where they have grown”, and “conventional wines [which] taste of the same few manufactured flavours”. Nothing in between, it seems. 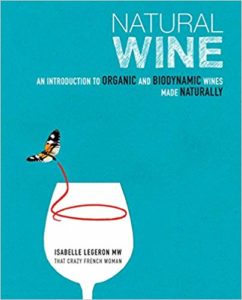 On the other hand, Isabelle Legeron, something of a goddess in the movement and author of an important book called Natural Wine: An introduction to organic and biodynamic wines made naturally, seems a little less fundamentalist – though still pretty rigorous about what is and isn’t natural wine. She writes (quoted on Raw Wine, the important natural wines website):

“Natural wine is a continuum, like ripples on a pond. At the epicentre of these ripples, are growers who produce wines absolutely naturally – nothing added and nothing removed. As you move away from this centre, the additions and manipulations begin, making the wine less and less natural, the further out you go. Eventually, the ripples disappear entirely, blending into the waters of the rest of the pond. At this point the term ‘natural wine’ no longer applies. You have moved into the realm of the conventional.”

According to the more-or-less accepted definitions, there are few “natural” wines in the Cape. The first reason for this is the small scale of organic viticulture here – an absolute requirement, and surely justifiably so. Testalonga, JH Meyer, Mother Rock, Intellego, Scions of Sinai, perhaps Reyneke, would be among them (I’m unsure of a few other producers, as I’ll explain below); and there are a few individual wines, like Radford Dale Nudity, which appear to qualify in all respects. (By the way, I did a search on Raw Wine for South African natural growers/makers, and came up with zero.)

But if one accepts the continuum idea, there are many new-wave Cape wines that are far closer to the natural extreme than the industrial one (the Swartland being home to many of the most prominent). They are seldom made from organically grown grapes (though frequently from grapes grown with fairly low levels of chemical intervention), but the wines are made without any additions (yeast, acid, enzymes, etc) or deletions (no fining or fine filtration, for example – coarse filtration seems to be an acceptable practice; probably only the most devoted natural wine-bibbers want floaters in their wines, even if they rather enjoy some haziness).

Without any additions, that is, except for low levels of sulphur. Sulphur additions to wine are a contentious issue in natural winemaking; there are no legal definitions, but various producer organisations have their own regulations. Some of these organisations, and ideologues like Pierre Jancou, demand no sulphur; others are content to accept levels of 30–50 milligrams per litre. (Interestingly to me, as far as I know no-one at all prohibits the use of sulphur in the vineyards, in the form of copper sulphate, generally regarded as vital.)

This sulphur issue is where it becomes particularly difficult to speak with confidence (my not having at this stage done the research) about the extent to which local organic, including biodynamic, producers would qualify as natural ones. At least some of Reyneke would, for example, but I’m not sure with regard to the few other organic estates, even those that are rigorous about avoiding other additives. Waterkloof, for example, speaks of adding “minimal levels of sulphur” (as do many – but “minimal” is not at all a useful word), but doesn’t declare the levels of sulphur in Waterkloof wines. Plenty of room for further research, then.  Personally, as someone who does appreciate a tendency towards naturalness, I’m also delighted to have sulphur additions in my wine, and drink mostly what are presumably unnatural wines. But then, I save my few moments of ideological rectitude for other things.