A recent tasting of local 2005s was well covered by its organiser, Angela Lloyd (here), and Christian Eedes (here). So I won’t talk about the wines, except to say that I expected more of them to show well than did; I want, rather, to point out how much “experts” (including winemakers) still have to learn about modern Cape wines: specifically about the effect of different vintages on different areas, styles and varieties.

Some of the context is that, as Christian wryly noted at the tasting, I always cavil at his “pessimistic” (and largely undiscriminating) drinking windows for wines he writes up. To some extent the difference between us is that I acquired a taste for old, developed wines – even, sometimes, those on the slippery slope to senescence, as long as they’re gliding downhill gracefully. But at this tasting I had to admit that he seemed to have a point – more than a few of these should have been drunk a few years back, and little grace was in evidence. But I wonder how great they’d have been even in youth, frankly. 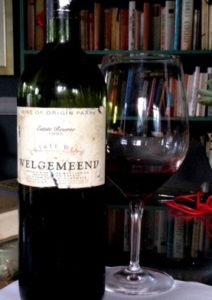 In search of solace and reassurance I turned later to a local red that was twice as old, and that I was pretty confident would be alive and well. As, indeed, Welgemeend Estate Reserve 1995 was. Possibly on the slopes and drying out a touch, but this lovely wine was elegant and fresh, with plenty of restrained flavour, showing a fine, savoury development, all harmoniously structured. The alcohol indicated on its label is 12.5%, yet I doubt that even Christian would call it green.

Sadly the vineyards this wine came from were already starting to show severe virus. And then the Hofmeyrs, who made South Africa’s first commercially released Bordeaux-style blend (1979) and were steeped in love of the kind of modest, old-fashioned Bordeaux into a line-up of which this 1995 could happily slip, sold the Paarl farm. Incidentally, many young “hipsters” (as Eben Sadie calls them) seem to think they invented lower-alcohol and less oaky wines, and also sneer at Bordeaux and its Cape equivalent. I wonder how many of them have tasted old Welgemeend (or old Kanonkop or Rustenberg – or old Bordeaux for that matter)? They could learn much about graceful drinkability if they did…. Actually, I wonder if they’ve ever even heard of Welgemeend, some of them.

I’m getting carried away, so let’s return to our sheep, as the French allegedly say.

My confident expectation of this 1995 was based on having drunk a great deal of Welgemeend, including old stuff, learning something about how it performed in different types of vintage, how it aged and developed. (The sort of information that, when one has it, can help make a sighted tasting infinitely more useful than an unsighted one.)

But the Cape wine revolution is still young; many of our better and best wines have little track record. Styles, winemaking and viticultural practices continue to change (as does the climate). Until we learn more, through years and decades of observation and monitoring, generalisations and specificities about how wines will age must inevitably be something more than difficult.

We don’t know, I’m suggesting, how to properly read Cape wine vintages or Cape wine yet. It’s really not something that can be done simply by technical assessment. Most comments about ageability must be to some extent guesswork – whether tending to Christian’s pessimism or my optimism. What is true, and I’m certain of this, is that it is meaningless and misleading to make a statement like: serious Stellenbosch cabernet has a drinking window of 3-6 years (or 10-15). Which cabernet? From precisely where? Which producer? Which vintage? Until we can reliably make distinctions among them, unconfidence would be appropriate.

We have much to learn: it’s an exciting individual and collective challenge.