What is fine wine? And good wine? Without reaching conclusions, I’ve been pondering this since I wrote recently about some (very drinkable) supermarket whites and wondering if I was in conflict with the rubric at the head of this website’s home page: “Everything to do with SA fine wine” – a statement that I’d not consciously noted before, let alone interrogated.

The answer to the first question might be a bit easier – unless you take good and fine to be more or less coterminous. Jancis Robinson doesn’t, not quite. In the Oxford Companion to Wine she attaches a specific association to “fine wine”: it is, she says, “a nebulous term, used by the auction houses to describe the sort of wines they sell”; that is, basically, investment wines such as top bordeaux and burgundy. No room there for even the smartest South African wine.

Then the Oxford Companion implicitly moves to allow for a contrast between “fine” and “good”. It says: “The extent to which this category of wine coincides with the best wine the world produces has declined slowly but steadily since the 1970s.” Because, to some extent challenging the auction houses, there are “fine wine traders, a small group of wine merchants who specialize in servicing the needs of collectors and the like”. So, on the requisite international level, possibly room for Kanonkop and Sadie Family Wines to squeeze in there – but certainly not most wines discussed on this website.

I’m not disputing Winemag’s rubric. We’re a basically parochial website, focusing on one small corner of the wine world; we don’t need to observe the conventions of a snobbish London-New York clique that decides what “fine wine” is. Or do we? Either way, I think we should loosely accept that “SA fine wine” refers to good (and not only the very best) local wine. Which leaves the definition of “good” wide open, of course. Perhaps critics that score wines would invoke a rating: a fine wine would be one scoring at least … 90? 93? 95? Tricky.

But we should include another element in “good” to do justice to some of the less-well-scoring wines that nonetheless get discussion and positive comment here. “Interesting” might be a word to cover part of this element of “good” – although using the word can sometimes seem like an evasive bit of pseudo-praise when one can’t wholeheartedly recommend a wine as good in any other sense. 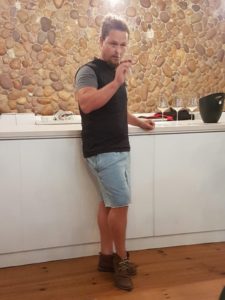 A case in point: the tasting this week of Johan “Stompie” Meyer’s latest releases in his Force Majeure, Mother Rock and JH Meyer ranges – all 16 of them, mostly from the 2017 vintage, some from 2018. A quick assessment using the words I’m concerned with here: None of these are truly fine wines in any tight sense of the word, I’d argue, though a couple are rather good. In that category I’d single out primarily some of the Mother Rock wines from the Swartland. Two whites: the thrillingly balanced, quite rich but precise White blend 2017 (about R140); with the bright Kweperfontein Chenin Blanc 2017 more expensive (over R200, like the rest of the range) but a touch less appealing. And Brutal Chenin Blanc is a decent, austere example of an orange (skin-contact) wine. Of the 2017 Mother Rock reds, I didn’t admire the too-lean, drily tannic Grenache, but the Holocene Red Blend, half from cinsault, is grippy but aromatic, sweet-fruited and refined. The Syrah was the one I particularly liked – a welcome return to form, after the faulty 2016 made me think Stompie was spreading himself too thin.

The less expensive Mother Rock Force Majeure wines (R110-ish) were mostly from the difficult 2018 vintage, which perhaps explains why I didn’t care for them. I found them heavily acidic (especially the rather sour Chenin Blanc) and lacking in weight and concentration. The Cinsault Rosé 2017 has more charm and depth.

Of the JH Meyer range, I thought the “pétillant naturel” (natural sparkling) Love Child Pinotage unappetising, dry and flavourless. But I seldom have affection for this style of wine, for me its artisanal authenticity not compensating for its crudity. The Palmiet Chardonnay 2017 is surprisingly ripely rich, lavishly textured, not unpleasingly oxidative in style. Unless it is naturalness you’re fetishising, I’d say you could do better with other local chardonnays at something over R200.

Stompie does four “natural” pinot noirs, which have a firm international following in the relevant celebratory wine circles, I believe. The least attractive of them is the thinly fruity Carbonic. The best, as usual, is the Elands River 2017 (pushing R300). If not fine, it’s certainly good. And, like all of these wines, it’s interesting.

Guaranteeing that interest generally is the fact that this is one of very few ranges of authentically “natural” wines made in the Cape – off organically farmed vineyards, made with minimal intervention in the cellar, to the extent that many have no added sulphur at all and the others have extremely little, qualifying them as “Alternative” wines, under the Wine of Origin legislation. That category’s low sulphur limit and the need to apply for it in advance is a safeguard against it being opportunistically used for conventionally made wines that “go wrong”. No need for that in Stompie Meyer’s case. These have emphatically not gone wrong, though he’s not actually aiming to make traditionally fine wines. What he’s after is transparency, authenticity, lightness and verve and, I suppose, one definition of drinkability. Perhaps he wouldn’t really mind being accused of making interesting rather than fine wines.