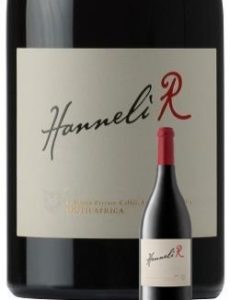 Let me start with a generalised conclusion – one which shouldn’t need underlining but I’m afraid does. That is: if you’re going to spend a lot of money on a genuinely grand wine and you drink it too young, you’re wasting a lot of your money, and would probably get more sensual pleasure from a cheaper wine designed to be drunk in its youth.

La Motte, to their great credit, do something of the necessary ageing with their Hanneli R, a syrah-based Rhône-style blend made in best years only, which is always released with a good few years of bottle maturity – gained, moreover, in doubtlessly perfect cool, dark conditions. In fact the currently available vintage is 2012, making the price tag (ex-farm at least) of R1100 more of a bargain than it might otherwise appear. Incidentally, in case you don’t know, the big red R on the label is for Rupert, and the wine is named for Hanneli Rupert-Koggelenberg, owner of the historic Franschhoek farm La Motte (she’sa very fine soprano too!).

I tasted this 2012 last week, with Angela Lloyd at one of our regular tastings of new-release wines that are sent to us, and took it home with me to try it with food and to see how it developed over a few days. Which I’m glad I did, as I appreciated it much more after time in contact with air, especially two days later. This is, of course, a first sign that the wine has further development potential.

The 2012 Hanneli R is 60% syrah (half each from Elim and Franschhoek), 30% Walker Bay grenache, and 10% petite sirah (the fact sheet speaks of “Petit Syrah”, but petite sirah is presumably the grape in question – aka durif). It spent 40 months in barrels (I’d guess at least quite a lot of them new), which is a long time, and there was on the first day of tasting a drying quality which I attributed to lengthy wood-ageing. But two days later it was all much better integrated and I wasn’t troubled by any dried-out quality, though the influence of oak is clear. The tannins are maturing nicely: firm but unaggressive, rounded, even savoury. There’s richness and sweet fruit, the acidity gives freshness. A very impressive, rather complex wine, all in all, in conservative mode (given what’s happening with top-end syrah and syrah blends in the Cape) – but why not?

I did decide, however, to open the bottle of Hanneli R 2007 I had lurking about (that was the second vintage of the wine, the first being 2005) to compare with it on that second day. The older wine showed an early-mature colour, with a mahogany rim; tertiary, savoury bouquet, but dark ripe fruit still apparent and promising the richness that is delivered – but delivered with a remarkably light gracefulness, I thought. I’ve just tried it again now, a day later, and it is still sappy and delightful (though in this case the wine has not gained by being open for a day). Long-finishing, complex and delicious. I’d guess that ten years is just about right for it – though there’s no hurry to drunk up if you’re lucky enough to have a stock of it!

What has the 2007 gained over the five-year-younger wine (assuming them to have been approximately similarly charactered)? Some complexity of flavour, certainly, with the fruit becoming more savoury. (Undoubtedly there will be some winelovers who would prefer the brighter – even brasher – fruit of the younger wine.) But really, for me, much of the gain is in the structure: the incomparable pleasure of mature tannins, the integration and the harmony of all the elements. A delicious experience. Trying the two side by side, the 2012 seems a bit raw still, even harsh. Buy it, if you can afford it, but keep it for another five years. It’s a fine wine and worthy of its price.

Incidentally, last week we also tasted two other impressive La Motte wines. Chardonnay 2016 (from the home farm) seems to me a pretty good buy at R120. Fresh, well focused and flavourful, with balanced bright acid. Nothing overdone – quite understated, even though there’s plenty of fruit (especially stonefruit) leading to a good pithy citrus finish.

La Motte Pierneef Syrah Viognier 2015 (R250) is rich enough, but lighter than the Hanneli R. From cool Walker Bay and Elim, with 6% viognier from Franschhoek. Light spice, a little florality, more herbal; a licorice note on the palate.  Well structured, nicely firm, fresh enough. A good wine – but giving a sense of still being closed, of having more to offer. It too needs time – the most widely undervalued, most luxuriously achieved and most valuable component in any bottle of fine wine.