Tim James: Leeu Passant on the up and up 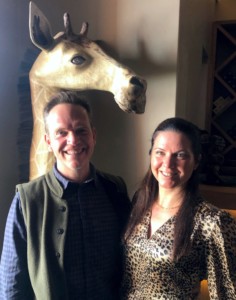 Andrea and Chris Mullineux’s venture beyond the vineyards of the Swartland (and into Cape heritage too) is proving a rather brilliant success. Last week saw the release of the latest vintages of the five Leeu Passant wines. The pleasure of attending the launch function was that – unlike last year when it was held on Zoom – it involved a visit to the beautiful tasting room (sorry, wine studio) of Mullineux and Leeu in Franschhoek, via the even more beautiful gardens – designed by the great Francesca Watson with as much flair, understanding and attention to detail as Andrea reveals in her wines. You should go.

Even better, all the vintages released to date of the Leeu Passant Chardonnay (2015–2020) and Dry Red Wine (2015-2017) were on offer, and there’s nothing like a vertical tasting, even when only a comparatively short one is possible, for helping to understand what a wine is all about, and to underscore the importance of bottle maturation for serious wines like these.

This is most obvious with the Chardonnay, which has always come from the same Helderberg vineyard block, and been made in essentially the same way. Vintage differences (and, obviously, levels of maturity) make for subtle difference of flavour profile and structure, but there’s a continuity: a balance of fairly rich, ripe power and intensity with textural finesse and freshness, and a lingering stony, lemon-tinged finish. As to the benefit of ageing, I remember noting five years ago that the maiden 2015, while elegant and vibrant, was showing evidence of new oak barrels; now that oak frame has been pulled into a developing complexity. There are real hints of tertiary development, and I’d suggest that those for whom developed flavours are less appealing than the charm of relative youth should start drinking it up now. The 2016 (a particularly small production) seemed more intense and perhaps more complex, certainly more youthful. For me the 2017 was already particularly lovely, both charming and flinty – hard to resist now, but I’d give it another few years to resolve everything into harmony. 2018 is very young still – the oak pronounced, the acidity not harmoniously integrated yet.

As to the newly released 2019, from a generally excellent vintage of warm Stellenbosch days and cool nights – does it justify its price as one of South Africa’s most expensive chardonnays, at around R700? Well, it’s certainly there amongst the elite in terms of quality, and now with something of a track record to show its claims to the potential of bottle maturity. This 2019 will flesh out over the coming years, but it’s now splendidly tight and bright, with a subtly forceful intensity, and I suspect it will be as fine as the 2017.

There are two 2018 cinsaults, from the two oldest red vineyards in the Cape – originally intended only for the Dry Red blend, but too interesting and distinctive not to also be bottled separately. The 1932-planted Franschhoek vines give a remarkably elegant, focused wine, perfumed but more savoury than fruity, nicely grippy, with a succulent, subtle intensity. The more tawny-coloured Wellington version (from a vineyard planted no later than 1900) gives a more obviously fragrantly fruit-filled wine, tighter and more tannic yet with more obvious charm. Personally, I’d dither for ages (while happily sipping) if I had to choose a favourite. Both are superbly dry and refined, amongst the small handful of really ambitious Cape cinsaults, and priced accordingly at approaching R600 per bottle.

If it’s a (relative) bargain from Leeu Passant that you’re after, the Stellenbosch Cabernet Sauvignon is a good one, at about R400. Quietly fragrant, notably dry, with dry chalky tannins, a delightful core of sweet fruit discernible in the balance, decent freshness, and no obvious oak. A declared alcohol of 13.5%. With most Stellenbosch cabs still struggling to emerge from a fixation with power, oak and very ripe flavours, this is for those who hanker after something approaching traditional Bordeaux savoury restraint.

Something similar, in fact, could be said for the Dry Red Wine, especially that combination of a ripely sweet centre of fruit in a dry, supple structure. Within an overall aesthetic, there have actually been some significant changes over the four released vintages, in terms of varietal mix and alcohol levels. Without going into details, let me say the wines are maturing very well, with the 2015’s tight, dry tannins integrating pleasingly. In this line-up, it was my favourite, in fact, certainly for drinking now. The cinsault component undoubtedly helps in terms of early approachability, and the only sin in drinking Leeu Passant Dry Red young is that you’re missing out on greater complexity and a finer, more resolved structure.

The current 2018, at just over R1 000 per bottle, no longer looks quite as expensive, given recent leaps in price from various likely and unlikely candidates, as the maiden 2015 did at a bit under that magical boundary. Its cabernet sauvignon component, ex Polkadraai, at 63% is the largest yet, with 21% Helderberg cab franc (2015 had 35% sauvignon and nearly as much franc). And the cinsault component is the lowest yet, at 16% (31% in 2015) – although there is a surprisingly generous cinsault perfume. The varietal differences are all vintage-dependent – Chris and Andrea evidently concluded that the great, fruit-rich charm of the 2018 would be a touch excessive if it included as much cinsault as had hitherto been considered appropriate to the blend. I must admit that it’s lovely to drink early (especially if well aerated by time uncorked or by splashy decanting, I’m sure), but rather give it more time to justify its price by what it will gain by maturing in the cool darkness of a well-stored bottle. Will it still be giving pleasure in half a century or more, like its great Cape models? A too abstract question for me, I fear, but I plan to monitor it for a while of its hopefully triumphant journey. It’s a very good wine indeed.