Statistics can be most revealing, of course – but can need interrogating or supplementing if they are to lead one towards a correct understanding. Sometimes it starts the other way round, and statistics must be ransacked to find support for something already known (or suspected). That’s how the little investigative adventure I’m reporting on began – though it led somewhere distant and unexpected. 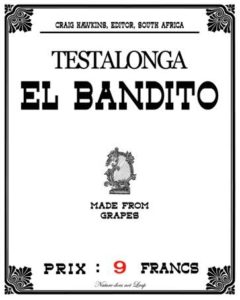 A prominent example of “natural wine”.

The first search related to one of the important features of the last decade or so in the ever-developing Cape wine revolution: the movement of ambitious winemakers away from additives in the cellar (commercial yeast, enzymes, tannin, colourants, heavy fining and filtration, sulphur – to an extent, etc) towards what we happily call natural wine – or, at least “more natural wine”, given the annexation of “natural wine” by the extremists (some might say the lunatic fringe) of the tendency.

Anyway, it became clear to me when I was proofreading Platters’ Guide 2016, just how many allusions there were to the concepts and keywords of this trend, most notably “natural” itself. Having access to electronic copies of the Guide, I was easily able to do some counting. I used the 2005, 2010 and 2015 editions and searched for “natural” (without paying much attention to the context of usage).

In 2005, Adobe Reader tells me, the word was used a mere 13 times (including only one actual reference to naturalness in the sense I spoke of above: Hazendal Chardonnay was described as being “mostly from natural fermentation”). The 2010 Platter’s turned up 147 naturals, and 2015 more than doubled that total to 332! I didn’t look for other keywords, as this set of numbers seemed sufficiently striking and illustrative of the trend (though there are, for example, many more non-inoculated wines than noted as “natural ferment”; Platter uses various synonyms – wild ferment, etc – and for a lot of wines the practice has not been noted).

I suddenly realised, however, that the category of “Natural Sweet” wine was playing a significant role in my counts. So I needed to do a search for the category. This little sidetrack it was that led to a surprise. In 2010 the phrase “Natural Sweet” turned up 63 times, in 2016, 127 times! (Again these don’t exactly correspond to the number of such wines made, but it must be close.)

It’s likely that, like me, you weren’t much surprised at the increased reference to a more natural approach to winemaking, especially the use of ambient rather than inoculated yeasts. But maybe you too hadn’t realised the extraordinary growth in the Natural Sweet category in the last decade, particularly the last five years. Clearly the market for sweet wines has grown more dramatically than I’d have imagined (Van Loveren’s Four Cousins rosé still probably leading the lucrative way). It does seem to be linked to another increased group: cheap, low-alcohol wines.

It’s very much a catch-all and undemanding category, requiring only the presence of more than 20 grams per litre of residual sugar – since 2010 it can also be called just “Sweet” (Semi/medium-sweet wine have to be less than 30 g/l), but I daresay producers and consumers like the idea of naturalness being invoked. Wines range from the grand (Klein Constantia Vin de Constance, Adoro Natural Sweet Mourvèdre) to a lot of frankly modest stuff at the bottom end: more whites than rosés, more rosés than reds. Most of them are, it must be said, more sweet than natural.