This week’s little adventure in the supermarket wine aisles took me to Pick n Pay in search of bargain-priced good quality red. I decided on syrah as I had recently opened – and fairly rapidly downed – a bottle of Syrah 2017 from Carinus Family Vineyards, that thoroughly promising entrant to the fine wine market that has also for some years supplied grapes to some top names (Alheit and Raats among them). The wine is made for Carinus by Lukas van Loggerenberg, so it’s not surprising that it’s good, which it really is, in the lighter, fresher but still vinous style that is so immediately attractive and promising of development. Of course, I had denied my bottle the development it deserved and settled for earlier-arriving satisfactions. At R150 or so, it seems to me a very good buy – that is the price of the 2018, anyway, which I see is now starting to arrive on the shelves.

Not, that is, Pick n Pay’s shelves, though the Constantia branch, being in a very plush neighbourhood, has many expensive labels of the more established kind (Waterford Kevin Arnold et al) as well as the cheaper-end stuff that I was wanting to plunder in hopeful search of delightfully well-priced good syrah. Or shiraz, I should call it here, as the three bottles I settled on used the more locally traditional name, though it has seemed to me that that the French synonym is being increasingly widely used these days. 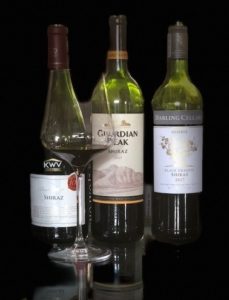 In search of well-priced good Shiraz.

As I expected, given that the Cape’s whites are at all levels generally better than the reds, the result was less convincing than it was for white blends last week. A whole lot less convincing. Perhaps I shouldn’t have been hopeful enough to go as low as R65, but I did, for KWV Classic Collection Shiraz (2017, like all three). Smoky, toasty from staves (I presume), a bit greenstick, a bit thickly textured, soft, and rather insipid right through to the sweetish finish.

There was a lot more quality jump that R5 would normally imply to Darling Cellars Black Granite Shiraz. It caught my eye as I’ve often thought of Darling Cellars as at least among the best of the co-ops. There’s more reliance on aromatic fruit than oak characters here, a touch more grip though it’s still pretty soft, with the almost inevitable touch of sweetness on the finish – but less than KWV’s. I could imagine being at a braai, with the wind wafting smoke into my face, and fairly happily unscrewing the bottle and drinking a glass or two of this. But, going back to my own little debate last week about “fine” and “good” – this is neither, in this website’s usual sense of those words.

Nor, unfortunately, could I suggest that serious syrah-lovers will find an escape from the R150+ level with Guardian Peak Shiraz, which sells at Pick n Pay for R95. Essentially it’s a slightly fresher, slightly blander version of the Darling Cellars, but still little in the way of structure, and not really much more satisfying. Personally I’d rather buy a decent beer with the difference and drink that. Like KWV it’s WO Western Cape, by the way.

In comments to my last supermarket musings, readers made a couple of very useful suggestions, including a few reds, though no shirazes. This is probably one of the most diverse categories of South African wine, in fact, including a few of the greatest Cape reds and a whole lot of dross. I wonder if the bargains here lie only at the higher, more expensive level? Like the aforementioned Carinus, and the possibly even more recommendable Intellego Syrah (R170ish). And, even grander, the Leeuwenkuil Heritage Reserve which competes with the best at a good discount (the 2013 is R339 at Cybercellar; R395 at Wine Cellar in Cape Town – 2013? why isn’t this great wine selling out?). Actually, that reminds me that it would be interesting to try the straight Leeuwenkuil Syrah at the same sort of price as the KWV and Darling Cellars wines.

As prices rise for good (“fine”) Cape wine, the less well-heeled, and those who are merely snoep must search around for trading down without too much loss of quality. But I think with Syrah it’s hard ducking under that scary R100 barrier. Of the ones I tried today, Darling Cellars is certainly the best value for money. But fine wine it ain’t.