And so the Cape wine revolution moves on, its energy undiminished, devouring the generations and bringing forth new ones. To the youngest people coming in as winemakers and viticulturists, Chris Alheit must seem like quite a senior figure in the industry and Eben Sadie a venerable one, if not exactly ancient – with André van Rensburg, if they’ve heard of him, vague in the mists of legend.

I was visited last week by a pair of young winemakers, about to release their first wine, and was ridiculously conscious of the generational thing, as Paul Hoogwerf’s aunt was at nursery school with me and later partnered me at my matric dance (the Funky Chicken was, I vaguely recall, the cool thing for those more sophisticated and less nerdish than me).

Paul and his old school-friend and now wine-partner, Doug Mylrea – of the family that owns Eagles’ Nest in Constantia – have some useful international experience and are in the fortunate position of being able to concentrate on their own brand, without the inconvenience (or, arguably, the opportunity and valuable discipline) of working in someone else’s cellar while their brand gets going. “Freedom” and “blank canvas” are the heady concepts with which they’re working.

Fortunate too, in having a ‘decrepit old barn’ on a family farm between Stanford and Hermanus, which they’ve adapted to their short-to-medium-term winemaking purposes. Apparently paradoxically, given their avoidance of “the assistant winemaker route”, their brand name, Maanschijn (moonshine) seems to allude to moonlighting, if not to illicit distillations – but in fact the connection is to a (comparatively) tall peak in the Hermanus area.

This year Doug and Paul brought in six varieties, “enough fruit to fill a barrel or three”, the grapes mostly from the Voor Paardeberg, three white, three black: verdelho, grenache gris, chenin, cinsaut, grenache and syrah. How many separate wines will come from these is unclear – they will “see how it all turns out”. But it’s a list familiar to winelovers following the Cape’s new school – including a negative reflection of the de rigueur haughty views on certain varieties: “You’ll never see us produce a sauvignon blanc”, promises Paul solemnly, and there’s a similar sternness about the world’s greatest red variety, so no prospect of a Maanschijn cabernet either.

Various small vinifications of the elect varieties were made, subtly different. Four chenin components, for example, included different lengths of time on the skins. Skin-contact is a noticeable contributor to the wine they’re set to release shortly, and, in addition to invoking this fashionable-archaic technique, Doug and Paul have, of course, all the right attitudes to non-interventionist winemaking (no additives, spontaneous fermentation, old oak, etc), while sensibly tolerating a little friendly sulphur. 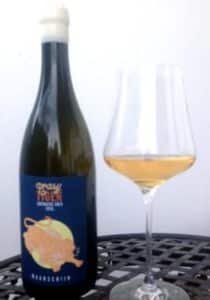 It all looks very promising – and the maiden, apricot-golden-hued 2016 Maanschijn tastes as good as the promise. It’s called Easy, Tiger (how splendid to have a comma in a wine name) with the attractive label featuring a rather oriental tiger that’s hard to take too seriously, prowling through vine-leaves rather than celestial clouds, against a yellow moon and a midnight sky. The wine has developed very nicely since Cathy van Zyl and I tasted it for Platter as a barrel sample about nine months back (when we rated it a provisional four stars; I might be more generous now), acquiring flesh and losing an austere edge, while maintaining its firm, serious dryness. It’s balanced, textured and sufficiently fresh – and pretty delicious, with lots of flavour (reminiscences of grenache’s floral charm) if not fruitiness; I enjoyed it very much indeed last week, and had no problem in polishing off the bottle, with just a little help.

This is definitely a wine to welcome, and a producer to look out for as the range expands. Though, if you’re counting, be warned that they’ve chosen a high-priced marketing strategy, and you’ll probably have to fork out something like R235. Which ain’t quite so easy as Easy, Tiger.