Tim James: Madeira then and now

If you were drinking Cape wine two centuries ago – whether in Cape Town or London – the chances are slight that it would be Constantia, unless you were rich and with good connections. Statistically, the likeliest is that you’d be enjoying (or very possibly otherwise) something that a merchant had sold to you as Cape madeira or, if he was particularly into fraud, simply as madeira. Again, most likely it would be made from greengrape, as semillon was then known – but that’s beside my point here.

The wines of Madeira, the small Portuguese island in the north Atlantic, had great fame back then. The best were fortified and to various degrees sweetened, and it had been discovered that heat (notably the effects of long, turbulent voyages to the east in the holds of ships, but also natural heating at home) had a remarkable effect on their quality, and also rendered them virtually indestructible. By the nineteenth century, the use of stoves (estufas) was providing a vastly cheaper but also much less satisfactory means to produce genuine madeira.

It was international fame, of course, that prompted merchants to use the name for their Cape wines, at a time when the idea of protecting references to origin was still far off – though there were certainly protests. Madeiran viticultural and cellar methods were also adduced at the Cape in some of the many efforts to improve the quality of Cape winemaking. So, “Cape madeira” was not just opportunistic fraud, but at least sometimes an attempt to emulate this great wine. I recently learnt that estufas were even established at the Cape in the nineteenth century in an attempt to improve the deception. 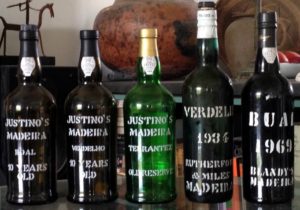 This little excursus is because madeira has cropped up significantly in my wine-life over the past year, firstly on a visit to Portugal (though I’ve not yet visited the island). It’s long been a love of mine, along with the other great fortifieds, port and sherry – though, of all of those currently rather unfashionable wines, madeira has suffered most (though retaining a fanatical small following), but that is partly because there is now comparatively little of it made. Oidium and then phylloxera devasted Madeira in the nineteenth century, and many vineyards were turned to other agricultural – and settlement and touristic – purposes. Now, the area of vinifera vineyards is under 500 hectares, which can’t be much different from the area of vines one sees driving up the Stellenboschkloof road on the way to Jordan.

But, oh, the best madeiras are incomparable. The serious stuff starts at wines sold at ten years of age (naturally heated, not by the artificial methods used for the cheaper versions), but it is the “vintage”, (garrafeira or frasquiera) madeiras, made from the traditional recommended varieties, with a minimum of 20 years in cask, which are the ultimate. They are not common, and expensive. In Lisbon last year I paid more for a bottle of Blandy’s 1969 Bual than I’d ever paid for any bottle in my life – well over R4000. The wine had spent over 40 years in cask before being bottled.

In a recent tasting for my regular tasting group, I included half of this bottle (the group paid for it, don’t worry!) in a tasting of madeira, which included another half – of a bottle of Rutherford and Miles 1934 Verdelho that I’d been given by a generous British friend with an amazing cellar – as well as a Terrantez (a now almost extinct variety) that was probably from the 1950s. That wine is from Justino’s, the only one of the half-dozen madeira houses with a small range imported into South Africa; we also sampled Justino’s 10 Years Old Sercial, Verdelho and Boal. (The cheapest source, for some of them, being Port-to-Port, at R585; the Terrantez would be around R2500 retail, I think).

The wines were all very good, and something of a revelation to many in the group, given the rareness of madeira, but the Blandy’s Bual was spectacularly marvellous. One thing in the tasting particularly surprised me. I’d prefaced the half-dozen madeiras with an oloroso sherry, just to orient the tasters and provide a comparison: the sherry drier, with lower acidity (a piercing acid is a characteristic of madeira). To conclude with another comparison, I offered what I knew to be a splendid 20 Year Old Graham’s Tawny Port – also a cask-matured, fortified wine, with a similar sugar level (around 80g/l) to the Bual. But after the fantastic concentration, intensity and high acidity of the madeiras, this lovely tawny came across as merely insipid. Another lesson, not only in the brilliance of fine madeira, but also in the need to drink a wine in the proper context in order to get the most out of it.