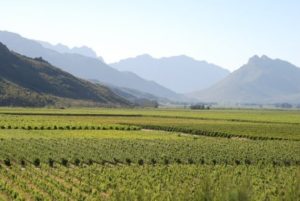 A sea of vineyards in the Breedekloof.

A week ago, I whacked you with some statistics, showing that the Cape was producing ever-more wine from ever-fewer vines. I subsequently asked for some comments about these higher yields from VinPro, which, among other things, aims to ”improve productivity and profitability” for  its producer members.

VinPro’s manager for Consultation Services, Francois VIljoen, was responsive and helpful. He largely confirmed some of the initial conclusions I drew in that article, but I thought it would be useful to offer some of the points he made, which amplify or refine some of mine. He wrote (these bullet points are mostly his words, slightly edited and trimmed):

Francois added in relation to this last point that forcing the vineyards to bear more “is a very short-term strategy that can damage a vineyard and shorten its lifespan”.

I also had helpful contact from Pieter van Niekerk, Senior Agricultural Economist at VinPro. He and Francois agreed about the main reason for many farmers going the route of increasing yields. “It’s actually simple”, said Francois: “The main driver for this was low/stagnant grape prices that forced our producers to increase their yields to financially survive/stay alive!”

Pieter reinforced this: “In short the average grape price remained stagnant (even declined in some cases); with rising input costs the only way producers could survive was by increasing their yields.”  Like Francois worrying about short-term strategies that do longer-term harm, Pieter did add that “However, some would say this is exactly falling in the trap of the commodity doom-loop, i.e. not actually addressing the true problem: Brand SA needs to gain margin in the international scale.”

It is clear to me, however, that the drive to higher yields for bulk-wine producers just points to the growing bifurcation in Cape wine, and how it is happening. For there’s also a small group of high-quality wine producers that are doing extremely well on the international market – not infrequently with low-yielding vineyards rescued from the vast blending tanks of the bulk-wine system that so dominates the Cape wine industry. Farmers they buy grapes from at good prices are also doing well. Other farmers are making their own high quality wines from their best-managed vines (sometimes the same – think of Eenzamheid, Carinus, Mont Blois, for example). Of course, not everyone can go this route, and it isn’t always an option in areas farmed for high-yield production. But it is undoubtedly one way genuinely forward, though it involves hard work and a bit of imagination.

The whole point of all-powerful KWV and its strategies in the 20th century was to protect the sort of farmers who are now suffering worst in a tough international market. Producing quantity rather than quality was then rewarded much more than it should have been and it established a pattern. A habit? An addiction? A mindset that’s hard to escape? Probably there is no escape without either moving from the bulk-wine paradigm or somehow managing to produce in bulk the sort of grapes and wine that will get better prices internationally.

There’s surely no fundamental agricultural reason why this can’t happen.  It’s easy to vaguely blame something else for the failings of “Brand SA”. That brand is doing brilliantly at some levels. Is the quality really there at the bulk level? I wonder. If it’s not, then increasing yields without raising quality is not going to solve the problem.