Having last week mentioned the great chardonnay scandal of the 1980s (see here), it occurred to me that some people might like to know a little more about an episode that in some ways captures crucial essences of Cape wine in the dour times of apartheid, isolation and KWV rule. Of course, there are also some people that want it thoroughly forgotten – but, as 2016 is the 30th anniversary of the “Klopper Report”, let’s unpack a little of the story.

The full title of Judge Klopper’s report dated September 1986 shows that it went quite a bit beyond chardonnay (though that noble variety was understandably the star, especially because of a certain misidentification): “Report of the Commission of Inquiry into the Cultivar Purity and Illegal Importation of Certain Vine Propagating Material”.

A notable bit of context is that the massively powerful, politically well-connected KWV exercised quasi-state power over the South African wine industry, including the importation and supply of vine material. Generally, KWV’s orientation was towards quantity rather than quality and to avoid innovation, while a small group of independent estates was eager to press ahead more ambitiously. KWV, ignoring recommendations from viticultural experts, seemed perversely determined to avoid improving the stock of chardonnay – while what was available locally was so disease-ridden as to be unplantable. Seemingly, it didn’t fit in with their strategies – including their strategy of control and power.

During the 1970s and early it was becoming obvious to everyone, including the authorities, that, in the face of pathetic supplies of healthy vine material of the varieties they wanted, farmers were avoiding the lengthy bureaucratic procedures and resorting to illegal imports. Vine stocks were smuggled mostly through the international airport in Johannesburg, but some came in more circuitously via Swaziland.

Many varieties seem to have been smuggled in, including merlot, but the specific varieties into which the Commission looked, as part of its research, were olasz riesling, pinot gris, chardonnay and auxerrois. Auxerrois was named because it was by then realised that much of the smuggled chardonnay (the most wanted variety) was that somewhat inferior variety. Somewhat embarrassingly, at least some (unnamed) experts couldn’t initially tell the difference. In fact it was this “purity” question that really made the state-sponsored inquiry inevitable.

A real problem for the industry, incidentally, was not only that a lot of unfashionable auxerrois had been planted and was unwanted, but that auxerrois and olasz riesling were not on the list of permitted cultivars. When these grapes could no longer masquerade as chardonnay or riesling (ie crouchen blanc!), nurseries in Wellington were left with large stocks of unsellable grafted wines…. 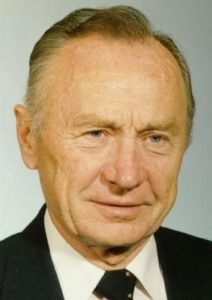 Julius Laszlo, a key figure in the illegal importation of chardonnay.

Those who’d broken the law with their imports included Stellenbosch Farmers Winery, Rhodes Fruit Farms (Anglo American), and Julius Laszlo of Distillers – and through Laszlo, other eminent people like Peter Finlayson, Danie de Wet, Anton Rupert, Jan “Boland” Coetzee, Sydney Back, NC Krone, Nico Myburgh and Achim von Arnim. To some they were heroes, to others mere criminals risking importing new diseases. Most engaged honestly with the Commission, and this was a factor in the recommendation that they not be charged.

And they weren’t charged. Things improved with regard to imports – certainly the quantity and quality of chardonnay increased enormously. The little book by Professor Orffer on Wine Grape Cultivars in South Africa, published in 1979, mentions only minuscule plantings then, “making up less than 0,01% of the national total” – though what he coyly calls “experimental plots” were widely planted. Four years after the release of the Klopper Report, plantings had already risen to about 1.5% of the total. As to olasz and auxerrois – well, not much of that about these days.

If you want to read more about the whole business, there’s a paper by the British historian Gavin Williams, called “Importing chardonnay: A South African political farce”, available from the American Association of Wine Economists. It suffers direly from a lack of sub-editing and proofing, but is interesting and thorough. It concludes by pointing to the rationality of the illegal imports, but notes: “The apparently unanswerable question is: why did companies and farmers import the wrong grapes and thereby make fools and heroes of themselves?”