Tim James: Nederburg and the challenges of effective branding

It’s a debate of relevance – probably unresolvable except by time – to countries as well as big brands: Does a reputation for lower quality wines drag down the overall image, despite significant top performers? Or do those top performers raise the image, pulling up the lesser stuff?

The question has obvious connections to South Africa’s international position now. Some champions of brand South Africa believe that concentrating on increasing the power (mostly via higher prices) of the top end will more than counterweight the drag of the bulk stuff of co-ops racing to the bottom. Perhaps it will, though I doubt it. Perhaps even those producers who suck a ridiculous price out of their thumbs for a wine without reputation or genuinely prestigious connections will sell a few bottles – at least of the first vintage – and even convince themselves that they are building the country’s reputation for wine rather than for silly gestures. (They presumably sneer at the pathetically slow pace of Sadie, Alheit, Mullineux et al, based on establishing a reputation rather than luridly attracting attention by aspirational pricing.)

Many co-ops themselves have also tried to lift their reputations through a few expensive, grander wines – usually reds, characterised by taking to clumsy excess some of the more easily achieved markers of “quality” in the Parker era: ripeness, soft tannins and oak. It’s not certain they make money directly from such wines, but the belief is that they add lustre to the large volumes of lower-end stuff. It’s a cheaper strategy than lifting quality generally.

In general terms, I suspect that the pulling up and the dragging down both happen simultaneously. Probably, to a large extent, the dominant reputation is whatever was established first, and it’s difficult to break. So, France produces vast quantities of poor, cheap wine, but the image of the country as a wine producer is high. Spain could lift its national reputation to a reasonable degree partly because it had a few famous established producers (eg Vega Sicilia) and brands (sherry, Rioja) when Priorat, Ribera del Duero et al came along with their revolutions. I’m hardly an expert in such things, but such would be my guess.

I’ve been thinking about this pulling up/dragging down conundrum because of Nederburg, in focus recently for one of its smartest wines: Two Centuries Cabernet Sauvignon. The 2014 vintage was Platters’ Red Wine of the Year, while the 2013 won the Warren Winiarski Trophy for best cab at the 2017 International Wine and Spirits Competition.

The past decade or so saw Nederburg (under the guidance of the now jettisoned Razvan Macici) not only lifting the quality of its basic ranges, but also introducing various top-level ranges alongside its Auction wines: Manor House, Ingenuity, Two Centuries and Heritage Heroes. Why so many ranges is unclear to me, but they include some very good wines that many prime estates would be happy to have. Yet, my impression is that these sub-brands have not managed to establish a reputation among serious winedrinkers commensurate with the quality of what it offers. They’re Nederburg above all, and still thought of as supermarket wine – including, it seems, by grander retailers, who stock very little of them. 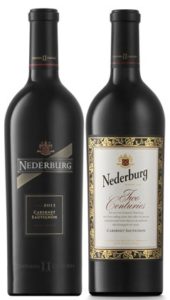 Possibly the image of the lower Nederburg ranges has been enhanced, but it looks pretty certain that they set the tone, tarnishing the top wines. I have a low opinion of Nederburg’s packaging and marketing of these top wines (Heritage Heroes as the sort of story that sells wine?), and one thing is notable, and arguably crucially wrong: the strong Nederburg branding. They’ve finally sorted out the silliness of the II Centuries name, changing it to Two Centuries (I  could have told them for free five years ago that it wasn’t clever to have their wine looking to some as though it was called Eleven Centuries), but the family name still dominates the redesigned label – maybe still dooming it by association. I think Distell should do some serious thinking about this.

As to that Two Centuries Cab: they proudly sent me a bottle of the 2013 (in the kitschiest presentation box you could imagine), and it is indeed good wine – though perhaps not up to international trophy standards. And hardly “classically styled”, as they suggest (nor “elegant” as Platters called it last year). It’s ripe, with full-fruited aromas and flavours, rich and powerful,  tannins soft enough but firm, not too oaky, a little sweet-finishing – pretty much in the established (now rather old-fashioned-seeming)  Stellenbosch-Paarl style, and as good or better than most. I see an unidentified vintage at Makro for R455, and the 2014 at Cybercellar for R395 – so not cheap. Maybe the only gap between it and prestigious success is the dominant name on the label.