To the best of my knowledge, the first Cape wine to proclaim “old vines” on its label was the Old Vines Barrel Reserve 1998, a chenin blanc from the winemaking team of Irina von Holdt and Francoise Botha, who’d brought out a pioneering chenin called Blue White in the mid 1990s. They also around this time named their venture Old Vines Wine Cellars (more recently modulated to Old Vines Cellars). Other early advocates of old vineyards included two Franschhoek producers: Eikehof, with the oldest semillon in the country, and Landau du Val, not far behind.

It was later, however, with the publicity that followed Rosa Kruger’s quest for the Cape’s old vineyards, primarily on behalf of L’Ormarins, that the idea of old vines started getting well publicised. And the release of Sadie Family’s Ouwingerderdreeks (Old Vine Series) in 2010, with wines from the previous year, made the concept much better known and brought it a prestige and significance which greatly accumulated since then. Looking back, that release of the initial six wines in the series appears as a seminal moment in the history of the Cape wine revolution. 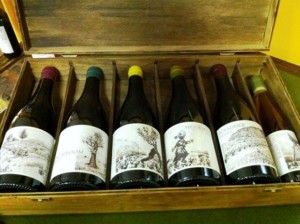 There were only 280 boxed sets of the initial six wines in the series – the number being dictated by the shortest run – which I reported at the time as being Kokerboom, apart from the half-bottles of the sweet muscat called Eselshoek, but which Eben recalled at this tasting as being Mev Kirsten. The initial labels were designed with drawings specially made by artist William Kentridge (see here for more on that); but from the following, 2010, vintage these were dropped, mostly to allow for an easy expansion of the range, and the current design was adopted.

So the maiden Ouwingerdreeks wines are now ten years old – a significant milestone, which has been noted by, for example, some pricey sales at auction (just over R25 000 inclusive on the Strauss & Co Johannesburg auction earlier this year, and just under R20 500 at the Cape Town one) and Harald Bresselschmidt showing the depth of the Aubergine cellar by offering special dinners with all six of the wines. In 2010, the price was R3850.

Angela Lloyd last Saturday broached her own well-cellared case of the wines and invited the two people most crucially involved in their creation, Eben Sadie and Rosa Kruger, as well as a few fortunate others, to come and taste them. All were in excellent condition, showing tertiary development to some degree, but far from needing to be drunk up soon. Probably the most advanced was ‘T Voedpad from the extreme north of the Swartland, always one of my favourites of the series in youth, and gorgeous enough here, especially its waxy, fennel-hinting aromas. Ripe and richly textured, with a light grip, but to me a touch off the harmony of the others. I’ve nothing much to say about the Eselshoek, from a block of hanepoort in ‘T Voetpad’s mixed vineyard: I’ve never found it very convincing, and didn’t lament when it fell out of the range after a few years. At ten years old, this one was dry-finishing, fairly elegant and pleasant enough.

One of the general favourites was Kokerboom, the semillon from the Skurfberg area. Certainly the most youthful in colour, it was fresh and lively, with lemony notes and a gunflint/toast element to the finish. Most of all a beautiful balance and harmony; a superb wine which should develop happily for a good few years. (How we tend to under-appreciate semillon, when all it needs is time and understanding to give us something marvellous!) 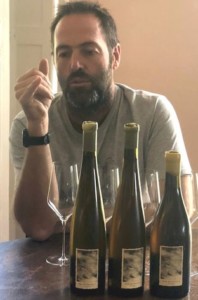 Skurfberg was the richer, more flavourful of the two chenins, though not at all flaunting its 14.8% alcohol; with a powdery texture and a flinty note. Should at least hold, and probably develop, a good few years. I was in a minority in finding Mev Kirsten, from an ancient, low-yielding Stellenbosch vineyard, the finer of the two. I relished its brighter lemony acidity and aromas of freshly ironed linen and its subtle elegance. This was the first of a more orthodox, less oxidative Mev Kirsten (“we went commercial in 2009”, Eben jokes about the change), as we were reminded by bottles of the 2006, 2007 and 2008 that Eben brought along to the tasting. (These forerunners of the Ouwingerdreeks were called Mrs Kirsten – she was made Afrikaans to fit in with all the other names.) These, particularly, are wines that will cruise (probably almost unchangingly in their case) for many years – I enjoyed their subtlety and dry austerity. Going back to the splendid 2009, one realised just how full of rich fruit it actually was by comparison.

The only red in that initial Ou Wingerdreeks line-up was Pofadder. I recently wrote about the 2010 and 2013 vintages of this wine, and like those wines this had developed very well – perhaps even better than my bottle of 2010 (which was a rather riper wine). The heady perfume of its youth had transmuted into something more valuable and complex, the obvious charm into something deeper. Finely balanced, with a good bright acidity and a bit of grippy tannin, all harmoniously and inextricably intertwined, as they should be in a serious wine moving gracefully into its second decade.