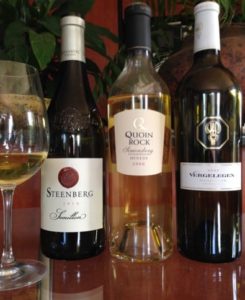 A little adventure with older local white wines began with Steenberg Semillon 2010. Five years is not, however, elderly for a serious, oaked wine from a variety which always takes a few years to show its best, even more than most. Perhaps that need for some maturity is why semillon is perennially under-appreciated by wine-drinkers. In fact, friend and colleague Angela Lloyd says (via Twitter) that she remembers when I “actively disliked semillon” – which I can’t myself remember, but then I’m also an older white and there’s much I’ve forgotten. I have certainly always thought that semillon is generally improved by a dash of sauvignon blanc (and vice versa).

The 2010 was drinking beautifully the other night – elegant, restrained and harmoniously balanced; I forget what I ate with it, but know I was watching (second time around) the final gripping episode of the notably brilliant Fargo TV series. The combination was so beguiling that writing a note on the wine increasingly seemed like a silly thing to do while there remained the possibility of drinking it; and drinking more made writing about ever more unlikely.

Actually I’m not at all sure the Steenberg would have been improved by a dash of sauvignon, given that the estate’s best examples, while impressively long-lived, tend to start showing pungent green-pea notes fairly soon, which is a character I don’t care for. In fact, someone was telling me recently that the maiden 2007 vintage of Steenberg’s Magna Carta (a sem-sauv blend) has now too emphatically and unattractively acquired it.

That was not a problem with a significantly older wine next evening: Vergelegen White 2005. (In typically inept Vergelegen fashion, they’ve changed the name at least once since then – it’s now called GVB White; or just GVB on the label.) This 2005 (with twice as much semillon as sauvignon in it) was always magnificent, though I remember how closed, but bursting with potential, it was in its early years. It remains excellent, though it’s perhaps reached its peak of maturity: a day after opening, the lingering, intense flavours were fading, and there was some mustiness on the bouquet. The honeyed lemon character is now more preserved lemon than fresh lemon, the honey more old honey. A fine wine still, but I shall drink up my last few bottles over the next year or two.

Next in my adventure was Quoin Rock Oculus 2007, from Simonsberg sauvignon blanc with 15% viognier. In my 2011 Platter entry on this wine I noted that it was “subdued, brooding, acidic; might yet expand”; also that the viognier added “both texture and subtle peach”. I gave it only four stars – perhaps partly because it was so outclassed by the Nicobar, the estate’s sauvignon from Agulhas – but now I realise I should have been more generous.

Oculus 2007 has, at eight years, “expanded” as I’d hoped, though still with a little quite fresh fruit on the nose. It’s less forceful and intense than the Vergelegen, and also has another year or two of good life in it, but it too shows none of that disfiguring (in my opinion) old-sauvignon green pungency. The main gorgeousness on offer, however, is the soft, velvety texture given by the viognier and oak-ageing (a quarter new). I haven’t had this wine for five years, but I think it might well be at its best now, though some would have liked more of the youthful fruit character. Which is fair enough, and a matter of choice – but everyone should at least try to also appreciate the charms of maturity. Speaking as an older white….