Tim James: On Bloemcool and a few other innovations from Fairview

Cauliflower and wine? Not a pairing with intuitive appeal – but they’re closer than you might think, at least at Fairview in Paarl. It probably wasn’t a bad idea, many decades back, to change the home farm’s name from the somewhat less mellifluous Bloemkoolfontein (cauliflower fountain). But also not a bad idea to more recently give the name, with a twist, to a range of more “esoteric” Fairview wines, some even experimental, some pretty definitely one-offs. They’re available in tiny quantities from the thriving Fairview tasting room and the website, all with Afrikaans names.

And, given the famous innovativeness of owner Charles Back, I’d guess it was he who decided to further invoke tradition by using “Bloemcool” – and also to underline the vegetable point by impregnating the hand-made labels (on the re-used bottles – with, yes, cauliflower seeds). Buy – drink – plant – eat. 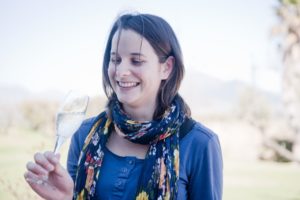 I confess I hadn’t heard of the Bloemcool wines until I was recently invited out to the farm by winemaker Stephanie Wiid – Anthony de Jager is still there in ultimate charge of the cellar, of course – to see some of the more exciting, innovative things in her portfolio. (Stephanie is also a partner in the new, hipsterish Thistle and Weed label.) I was impressed to see – and taste – what’s happening. This part of the Fairview list, at least, is not governed by the safe, “commercial” approach I mostly associate with the winery. Of course, I couldn’t taste all the other Fairview wines to re-establish the context – it would have taken a few days of solid work, I reckon, to get through them all – but I was most pleased with what I did discover.

We started with the surprisingly (to me) successful MCC Fontein 2014 (R150 – I’m giving prices off the website for those still available). Surprisingly, because who’d have thought a quality bubbly could be made with viognier? (I was reminded recently that Fairview was the first local producer of varietal viogner – as recently as 1998, believe it or not.) This was fresh, subtly floral and rather elegant. That’s not what I’d say about the straight viognier in the range, however: the pleasant enough, bold, ripe and rather alcoholic Skilpadrug.

There were two very successful “orange” wines. The Sondebok [“scapegoat”] Steen 2015 was just 3–4 days on the skins, leaving a hint of fresh chenin fruit, along with a spicy note. Quite intense, with an easy-going texture and a good grip. Very nice. The back label, as on all these, indicates the number of bottles made: just 340 in this case, from the old maturation barrel.

Still to be released is the youthfully closed Mooi Wyn 2016, from grenache blanc and longer on the skins (with no stems; in stainless steel) – approaching 10 days, yet retaining some characteristic aromatic florality. Very good, with great acidity, a nice dry and lightly grippy finish.

The white I most enjoyed was the Bloemcool Vis & Tjips (R170; a silly, unattractive name in my opinion, but I wouldn’t fancy my chances in pitting my market savvy against the redoubtable Charles’s). A clever, successful blend of ripe-fruited verdelho with skin-fermented chenin,giving a rather complex aromatic, spicy character. Great balance and flavour, good length.

There were a few reds too, generally less interesting than the whites I thought, but the Ernestus 2014, a Swartland Syrah for R350 is very good – with no new oak and fresher than most Fairview reds, though ripe; a spicy, dried-herbal and pleasant departure from what seems like cellar tradition.

Suggesting, though, that that tradition might be generally shifting a little, when we moved on to what is called the Regional Revival range, with more established names, the wine that I most enjoyed was Homtini 2015 – the “Supertuscan” blend, now entirely from Darling, of sangiovese with merlot, cab and shiraz. (Some will remember that in the old days Homtini was Anthony de Jager’s own wine, a syrah; presumably his label was bought out by the boss and transfigured). Much lighter and less ripe, oaky and pretentious than some other local wines of the category that I can think of (Nederburg Ingenuity Red Italian Blend; Dalla Cia Teano), it has a forward ripe charm, but also some freshness, with a winning and “authentic” wild cherry element. At R160 ex-farm, this is a good buy. And a good sign of the good, lightening-up things that seem to be happening at Fairview. I look forward to watching and tasting Stephanie Wiid’s influence on the whole range over years to come.