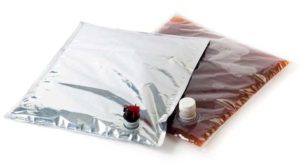 Did you know that “papsak” was one of five South African words added to the august Oxford English Dictionary in 2015? Why it took them so long to discover this one, I’m not sure, but I’m glad they found it at last. Even in my Oxford Dictionary of South African English, 1978 edition, it’s not given with its wine-related meaning (the liquid-holding container in boxed wine). As I started pursuing the history of the papsak, however, I discovered why.

My quest started when a historian friend of mine living in Oxford recently emailed me some questions about names for cheap wine in South Africa. One of them was papsak, but I hadn’t heard of the other. Apparently, “In 1945 a Commission of Enquiry into Cape Coloured liquor consumption reported that the most prevalent form of alcohol consumption was ‘canteen wine’.” So, my friend asked: “Did canteen wine and papsak have anything to do with each other?”

It was easier to establish a sufficient story for canteen wine. The phrase goes back (at least) well into the 19th century in South Africa when a canteen was basically a drinking shop or pub. The cheap bulk wine supplied to it was “canteen wine”. I’ve never heard the phrase in English, but the Afrikaans equivalent (which was probably the original usage) still seems to have currency – my enviably bilingual pal Melvyn Minnaar assures me that any Afrikaner would know what kantienwyn is.

Investigating “papsak” involved a little more sleuthing. It’s obviously an Afrikaans word (now borrowed into English) simply meaning “soft bag”, in this case, the wine-containing bladder. Almost certainly it was born as slang amongst “coloured” wine-drinkers of the Western Cape for the cheapest kind of wine. The sort of wine, in fact, that was sold from the back-doors of co-ops on Friday evening in metal foil bags – the papsak, unencased in boxes. Selling wine in this way was made illegal in 2007, as the government pursued its strategy of dealing with symptoms rather than causes when it comes to the tragic endemic alcoholism of the Western Cape. But that’s another story.

It seems that putting liquid in bags-in-boxes was an American invention, but it was first used for wine in Australia in 1965. The air-tight tap and the metallising of the bladder happened a few years later, also in Australia. The rest is history, as a visit to any supermarket wine department anywhere in the world will prove. But who first made bag-in-box wine in South Africa? I asked around and was surprised by the answer. Veteran wine man Duimpie Bayly pointed the way. Simonsig! Such a respectable Stellenbosch estate. Yet another local innovation by that great pioneer Frans Malan. Though Duimpie wasn’t quite sure of the date.

Frans Malan’s son Johan, now Simonsig cellarmaster, remembers the time well. It was the early 1970s, he told me. Desperate days for Simonsig, rebelling against the power of the mighty merchants and needing an independent outlet for big volumes of modest wines. This new technology offered some answer. There were three Simonsig five-litre bag-in-box wines branded as Caponero: a dry white, a semi-sweet-white, and a dry red. The bladders were not metallic then, says Johan (who was involved in filling them), but triple-layered transparent plastic.

The range lasted for most of the 1970s, Johan told me, but Simonsig was less successful than the second user of the technology, in 1979: Cellar Cask. Owned by Distell, Cellar Cask is still around. Interestingly and erroneously, the Revised 1982 edition of Platter speaks of it as “the first range to be made in 5-litre containers”, and the latest edition repeats the mistake, saying it was “South Africa’s first bag-in-box”. Time for that to be corrected, I think, and for Simonsig to get the credit (though I suspect they’re not frantically concerned to be associated with the concept).

But the papsak itself only acquired its real notoriety – and, probably, its name – when it started flying solo, as the cheapest legal (usually) way of getting wine from the dregs of the co-op tanks to the palates and livers of impoverished, not very discriminating but keen wine-drinkers.

If anyone can offer any printed evidence as to when the name was first being used, I’d love to know. So too, I’m sure, would the academics behind the prestigious dictionary, the Woordeboek van die Afrikaanse Taal. “Papsak” is not the sort of word that enters the respectability of the written language (crucial for dictionary-makers) early in its life. Dr FJ Lombard of Stellenbosch University told me when I was asking about the history of the word, that “The earliest date that we have from our index cards, is 1994”. But, he added, “I asked a few of the older colleagues about “papsak” and some of them know the word from their days as students, circa 1987–1990”.

It would be good to know more about this word that is, for good and ill, an important one in the history of the Cape’s wine culture.

Incidentally, there seems to be at least one other Afrikaans slang word for the papsak, and a rather more poetic one, alluding to the bag’s metallic sheen as well as its firm plumpness: silvervis (silverfish). But this word is proving even more elusive to chase – despite it now being the ironic brand name of one of the leaders of Cape wine’s avant-garde.

And, in case you were wondering, the other South Africanisms that made it into the OED in 2015 were Mahala, tenderpreneur, whoonga, and zef.