Let me start by digressing. I was browsing today through R.U. Kenney’s biography – more a hagiography, really – of Abraham Perold, and paused at the advice the great viticulturist gave to Hans von Carlowitz about vines for Uitkyk, the Stellenbosch estate that the aristocratic German bought in 1929. Carlowitz told Kenney that “under [Perold’s] guidance we planted Steen, Clairette Blanche, Riesling, Cabernet and Hermitage”.

That needs translation from more than Afrikaans: Steen is chenin blanc, of course, and hermitage is cinsaut, and riesling is “Cape riesling”. Clairette is the grape I will return to after this digression, but given the current fashionability of cinsaut I thought it worth quoting further (my translation again): “Mr von Carlowitz then said how wonderful it was for him to see how cinsaut helped to age the cabernet. There we have the secret of the making of one of our best blends”. That blend was the then famous Uitkyk Carlonet.

I presume that the clairette went in small quantities into the chenin-crouchen blend called Carlsheim. Blending was, and remains, the common fate of clairette since this southern French variety was introduced to the Cape, we presume in the early 1900s. Perold described it in his 1926 viticulture book as particularly suited to blends with other light white wines, whose quality and bouquet it improves.

A rather later academic viticulturist, Chris Orffer, repeated the opinion in his 1979 little book on Wine grape cultivars in South Africa, but added that it was also used here for sparkling wine (as it was in France). He notes that plantings of clairette constituted 3.4% of the national vineyard, mostly in Stellenbosch, followed by Paarl, Tulbagh and Malmesbury in that order.

Two-and-a-half million vines in Stellenbosch, says Orffer! Mick and Jeanine Craven, who make one of the Cape’s very few varietal clairettes these days (there used to be a few more) think that the little Polkadraai block they use is one of the last in Stellenbosch (officially there are 11.4 hectares there). Which tells much of clairette’s story in modern South Africa; it’s down to 0.23% of the vineyard total, nearly half of it in Worcester, and presumably the vast majority disappears into co-op blending tanks.

The “naturally” made Craven Clairette Blanche 2015 is a delightful, fresh, early-picked wine, partly whole-bunch-fermented in old oak, partly more orthodoxly made in stainless steel, before the components are matured together in neutral old barrels. Bone-dry, and at scarcely more than 11% alcohol immensely, pleasurably drinkable. 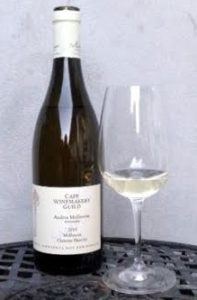 There’s a tiny bit of the variety in Swartland, which ends up in a few of the region’s smart white blends – and in Andrea Mullineux’s CWG Auction Clairette Blanche 2015. The Mullineux pair have made a few varietal clairettes before, for their club and (from Wellington fruit) the Three Foxes brand, but this is the most prominent offering – part of Andrea’s “effort to showcase how special historically significant varieties are in South Africa”. She gave me a sample bottle to try, hence these ramblings, as I opened it this evening.

It’s a fine wine, riper and richer than the Craven, less austere, more suave, but its strength remains delicate and elegant. There are floral notes (rosepetal, perhaps), a little citrus and stonefruit, also some savoury dustiness – and a savoury thread throughout; but mostly it’s refined and silky, with a penetrating but integrated acid. Altogether seductive, and as enjoyably drinkable as the Craven. It might age – I have no idea, really, but I wouldn’t, myself, risk it for many years.

Congratulations to Andrea, not only on a fine wine (we established fans expect nothing less) but on doing something interesting and off-beat for the Auction.