There aren’t many genuinely humorous wine labels that I can think of – some that are jokey, perhaps, in a calculated, advertising-agency or too-cute sort of way, but few that seem to suggest that there are people involved who actually have laughed together while coming up with the name or the image. That suggestion is what I like about the Ron Burgundy wines – they’re scarcely uproarious but I do get the idea that the humour involved genuinely expresses the people behind them rather than being a cynical attempt to appeal to others. I’ll come back to Ron. 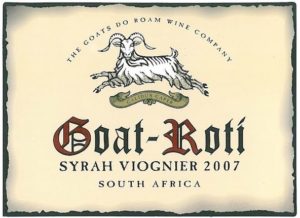 The oldest humorous South African wine label I can think of is Fairview’s Goats do Roam, first vintage 1999, a sufficiently witty play on Côtes du Rhône to have annoyed the French, and organically emerging from Fairview farming goats as well as grapes. Because of the label’s success, it was followed up by a series of similarly punning names – like Goat-Roti, Bored Doe and The Goatfather – less amusing the more laboured they became.

More recently, the lamentable fashion (may it soon pass!) for phrase-long wine names has inevitably brought along some that are purportedly funny. Take, for example, the mostly one-off wines marketed by that top British importer of South African wines, Richard Kelley, under the Liberator label. They’ve included The Grape Escape and An Arrogance of Sommeliers, raising a weak smile, and Midnight at the Lost & Found – whether or not that’s meant to be amusing or, conceivably, tragic I have no idea.

Senses of humour vary – other people’s are obviously inadequate compared to one’s own. So I can’t be sure how many people find the name Patatsblanc as amusing as I do. Patat is the Afrikaans for sweet potato, and surely an inherently funny word – unlike potato, which is merely ugly. 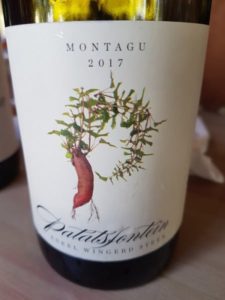 It followed on Patatsfontein Steen, which was so named because the Montagu farm the grapes came from had been called Patatsfontein. Though Reneen Borman who makes the wine does admit it had a funny side which appealed. The images on the attractive labels are pretty straight-up – unless you think it a trifle odd to have a picture of a sweet potato on your bottle of chenin.

(Incidentally, if you had a farm on which you grew a crop, would you name it after that crop and append “fountain”? Bizarre or what? Fairview used to be called Bloemkoolfontein, bloem/blomkool being Afrikaans for cauliflower,  but the Backs unhumorously changed the name to something soothing and banal – although perhaps it was a joke after all, as the view from (or of) Fairview is dull by Western Cape standards. The thing is, presumably, that those earlier farmers in dry South Africa were so obsessed with water and the lack of it that “fontein” was presumably the most aspirational thing they could think of when it came to naming their patch of earth. There are thousands of such formulations – dozens mentioned in Platter alone.)

The humour of Reenen Borman and his two partners in the Montagu project has a further outlet on the back label of Patatsfontein Steen (a great wine, incidentally). There you will find, in Afrikaans, a tale, totally incomprehensible to me, about Jacob’s biblical fight with an angel, ending with the injunction to “drink more wine, eat more bread”. Another story – a spurious cluster of Wild West clichés – appears on the backlabel of their Syrah, which is called (you try guessing why) Sons of Sugarland. The front label seems to have nothing to do with anything else. This all borders on surrealism, as well as humour.

As for the three men behind these wines – Reneen plus Fritz Schoon and Henk Kotze – they’d all liked an American comedy featuring a character called Ron Burgundy. The inadvertent wine link appealed. Says Reenen: “We kept joking to each other to start a company called Ron Burgundy and before we knew Henk went and did it.” Now they’re stuck with it (and who’s going to think of looking up Patatsblanc under that name in Platter?). 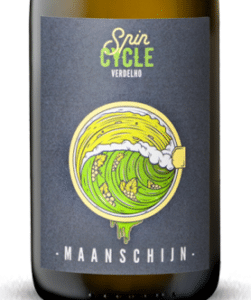 This label humour goes wide. I’ve just seen a wine label featuring a washing machine window (a very attractive label it is): Maanschijn’s Spin Cycle. With a true story behind it, of the impecunious young winemakers being lent a homemade wine press to separate their verdelho juice from lees. It turned out to be made from an old washing machine and a car tire. Well, something like that. Funny business, wine.