Tim James: On Port and the joys of travel

At the risk of sounding really stupid (”what did this guy think?!”) – it’s taken my first trip to the Douro region of Portugal to properly realise how tiny is the Cape’s “port” category. Smaller, of course, than it used to be back in the old days when the KWV was making vast quantities of fortified wines of various kinds (some of it very good – I’ll return to that point). South African port vineyards could get just about lost in one wrinkle of the vast mountainous Douro landscape of vines; its total production could squat in a corner of one of the “lodges” (where most port matures) in Vila Nova de Gaia, on the banks of the Douro opposite the historic centre of Oporto city.

I feel right now (I’m writing from Lisbon, after the Douro visit) that I could go on extensively about this marvellous region, home of port and increasingly of a large number of fine table wines, both red and white, made from traditional varieties. It’s an area of often brilliantly meticulous mountain viticulture and often brilliantly meticulous winemaking – with perhaps the tightest regulation and quality control of any area in the world. A thrilling and harshly beautiful place to visit, with Oporto (at one end of the valley) an equally pleasing city.

But I’m interested now also in the connection to the Cape – one which was alluded to interestingly by two of my hosts for tastings in the port lodges. 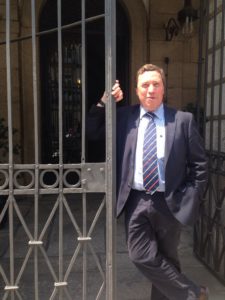 David Guimaraens (a quintessential English gentleman – and British citizen despite the surname and a long genealogical connection also to the Portuguese side of the port business) is winemaker (and much else – he’s one of port’s great figures) of the great house of Taylor’s. I brought him a bottle, for interest’s sake, of the De Krans blend of Portuguese varieties, Tritonia 2015. And I told him about my tasting a few years back a bottle of Taylor’s 1948 – one of the greatest ports ever, perhaps – alongside a splendid KWV port of the same vintage.

David is remarkably welcoming of the idea of “competing” ports being made elsewhere, including South Africa. He knows that some locals wouldn’t agree, but he himself talks unworriedly of “South African port” (a phrase I was careful to avoid myself) and isn’t uptight about sharing the nomenclature. He is keen on building the category internationally – and if others can make decent stuff, no problem. Of course, as I suggested earlier, there’s little chance of really effective competition from elsewhere, especially in terms of scale.

I was nonetheless further surprised at a story told by Dominic Symington, another English gentleman deeply involved in the port trade, as his family has been for many generations. Dominic came in for a chat while we were in the middle of tasting an amazing array of, amongst others, Graham’s tawny ports (10, 20, 30 and 40 year olds, and a stupendous 1972 single harvest), Graham’s being one of the port “shippers” owned by Symingtons.

Dominic’s remarks on the ports were illuminating, of course, but it was the tale he told that struck me as expressing a largeness of spirit to match the grandeur of the landscape he inhabits. He spoke a little of South African port, and then of a high-level tasting exam he’d undergone some years back. He’d come to a fine fortified wine. Clearly old, clearly port … but … there was something that didn’t quite fit – the great quality was there, but the wine was different from what he knew (and believe me, a Symington by adulthood knows pretty much all there is to know about port).

The wine in question turned out to be a KWV Paarl Port from 1945, and David remembers it as amongst the finer wines of his experience.

I felt proud when he told this story – not patriotically proud, almost the opposite. Proud of the great international confraternity of winemakers and winelovers, whose country is fine wine, one where petty jealousy and protectionism (as opposed to terroir) must sink into insignificance and others’ good work is recognised, with neither possessiveness nor condescension.