Pinot noir day? Says who? I don’t know, but it’s somehow agreed by enough people that tomorrow is it: 18 August. So, as with Mother’s Day, don’t look too deeply, and guiltily take it as authorised encouragement to express deserved affection.

Pinot, I do love you, and thanks for all you’ve done for me over the years.

The grape has been something of a 21st century Cape success story. The fewer than 500 hectares planted in 2000 just about doubled ten years later, and now pinot is the 12th most planted variety at 1118  ha, easing ahead of semillon. Sadly for pinot lovers, the planting enthusiasm is mostly accounted for by sparkling wines – a must-have (that is, a can-sell!) for many estates. Happily for pinot lovers though, quality has risen dramatically. It’s hard to believe the widespread international conviction in the 1980s, even 1990s, that only Burgundy that could make good wines from pinot – the fickle one, the heartbreak grape that teased besotted winegrowers around the world but declined to offer up its charms except to miserable peasants in a rather dull part of France. Nowadays, Burgundy remains untouchable (except sometimes in blind tastings), but the world offers a number of close also-ran pinot-producing areas: Germany, New Zealand, the north-west coast of America, Tasmania, the Cape South Coast (especially) in South Africa.

Despite another prevalent myth, the pioneer planting of pinot in the Cape seems to have been at Alto in Stellenbosch, soon after it was imported by Perold in the second decade of the twentieth century. It didn’t last long there, and the first pinot wine came from Muratie – the only example for many decades.

The modern pinot era in the Cape began in the late 1970s, with Tim Hamilton-Russell and his then winemaker, Peter Finlayson, in the Hemel-en-Aarde. The correctness of their insight (or guess) about the suitability of that terroir is to be seen in a current list of the best pinots. Successful plantings have spread widely, however – as far inland and as high as Sutherland-Karoo (Super Single), with other more-or less successful outliers at, for example, Fryer’s Cove up the West Coast, Herold in the coolness of the Outeniqua mountains, Ceres, a notable Franschhoek success at Chamonix. Another high place in the rather mysterious Elandskloof Valley near Villiersdorp (home to the famous Kaaimansgsat vineyards).  Not Constantia, oddly, despite its comparative coolness; and the Cape’s top overall area, Stellenbosch has a scattering of decent examples to offer.

Elgin comes second to the Hemel-en-Aarde, in my experience and opinion, led by Paul Cluver, Oak Valley, Cathy Marshall, Richard Kershaw, Stellenbosch-based Winery of Good Hope, and with much to be hoped for from terroir-obsessed Koen Roose at Spioenkop, who’s starting to bring out bottlings off his three vineyards.

I’m not going to mention most of the Hemel-en-Aarde examples – there are many, and they’re well-known, and often excellent. But two of my three favourite pinot producers are based in the area, and the third, Peter-Allan Finlayson’s Crystallum, is much invested there. Probably significantly, all three explore the transparency of pinot noir with different soils and, to an extent, other conditions, including climatic ones. There are three Crystallum terroir pinots, and Newton Johnson offers, when vintage conditions allow the Family Vineyards blend to permit it, three “deconstucted” versions, from the three diverse estate vineyards. 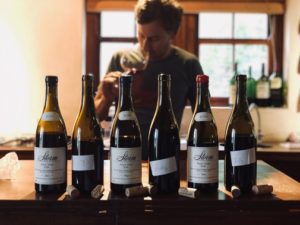 Most fascinating of all, arguably, are the three small-volume Storm pinots which Hannes Storm makes, one from each of the small wards in the Hemel-en-Aarde (as yet he’s the only winegrower to do this): Vrede, from Hemel-en-Aarde Valley, Ignis from Upper Hemel-en-Aarde, and Ridge from Hemel-en-Aarde. Not only are they consistently distinctive, year-on year, they are consistently superb – though not easy to drink (while easy to marvel at) in their youth. I wouldn’t spend over R500 on a bottle of one of these wines to drink within a minimum of five years – as with fine burgundy, not only are they far short of what they will become, I don’t think they’re all that much fun in their infancy (Ignis comes closest) but in five years, or ten, or even longer the magnificence will grow, and match burgundies that cost twice or three times this.

Value for money? Ah. That’s another story. As Cape red wines go, pinot is undoubtedly expensive and there is certainly a better general quality-price ratio for syrah, certainly at prices below R250. But sometimes one wants pinot. If you can possibly accept R260-odd as affordable good value, then Crystallum’s area-blend Peter Max would be it. For lesser wine, but half the price, more easily available, and undoubtedly delicious, I suspect Woolworth’s might be best, with DMZ from DeMorgenzon and decent examples also from Cathy Marshall and Paul Cluver, all for much less than R150.

But if it’s the real magic you want, it’ll cost you more. And patience.