Tim James: On the Difficulty of Describing Great Wine 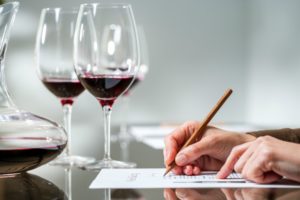 I’m wondering why I find it easier to write about wines that I don’t much like than about those I love. The question is no doubt cropping up now because I’m writing (for the next Platter’s South African Wine Guide) many more notes than usual, and that’s being my experience. Making tasting notes is never a source of pleasure or satisfaction to me, in fact; despite the pleasure and satisfaction I get from drinking the stuff, I much prefer writing about what I think of as the cultural side of a bottle of wine – people, place, time – to trying to describe the contents.

But at Platter time I have to conjure up any number of brief descriptions. Hence my noticing what I mentioned: that I find it more difficult to write vaguely usefully – and not too vapidly! – about the wines I most like. A few words about a vineyard or a detail of winemaking will fill a bit of the allotted space, but not enough, and such notes are anyway neutral, suitable for good or bad wines. Oh, I can pile on the qualitative adjectives, which all add up to saying that the wine is very good – but a score or star rating can do as much.

All those other adjectives, purporting to describe aromas and flavours (the sort of list that American tasting notes in particular largely consist of – the more abstruse the better), I try to avoid until I’m desperate. What’s inherently good or bad about pan-fried Asian herbs on an aroma? And when I resort to a scattering of such adjectives, I try not to give the impression of certainty and precision (unlike many tasters, more confident than I am), as I feel that would imply that another drinker of the wine is not going to come up with a remarkably different set of “organoleptic descriptors” – because I know that another drinker definitely, inevitably, justifiably, will do just that.

When there are any shortcomings in a wine, I can leap on them gratefully: too much oak; powerful alcohol giving heat on the finish; over-ripe; acid that comes in with a rush at the end, acid added to make the flabby wine give a brief illusion of freshness; shortness of finish; the taint of brettanomyces  (unless it’s working happily in the wine); mercaptans (unless it’s a New Zealand sauvignon blanc); insipidity; banality; triviality. That sort of thing.

But when there are none of those failings, what to say of the crucial essence? The wine is balanced; there’s harmony or the promise of harmony; the aromas and flavours are subtle; it’s elegant – or powerfully impressive; it’s serious but still joyous; the flavours linger; there’s complexity, layers of flavour perhaps; it has matured magnificently; it will (probably) mature magnificently; it’s fresh, pure; it’s well structured – well, of course it is. Of course it is all those things. All great wines are all of those things, or most of them.

It’s like what Tolstoy says in the opening sentence of Anna Karenina: “All happy families resemble one another, but each unhappy family is unhappy in its own way.”

Of course, as Tolstoy knew about happy families, good wines are crucially different in their experienced details. Magnetic North Mountain Makstok is not going to be confused with Columella or with Paul Sauer or Reyneke White. But when it comes to what one can say about the marvellousness of them, it’s hard to get beyond the marvellous similarities (harmony, complexity, etc). I always want to say about the best wines: it’s all the usual good stuff, plus something magical. Something not  describable – only to be communicated sensually (to a sufficiently experienced, educated palate, I would sternly add).

And once one gets to that point, it’s hard for me to understand the adding or docking of a point or two. But that’s another story, another difficulty.