Tim James: On the importance of decent wine glasses

A hi-fi geek friend told me that the first thing anyone eager to improve their sound equipment should do is upgrade all the cabling, especially the speaker wires: it’s comparatively cheap and entirely effective. I can think of two equivalent lessons for beginners in learning to get the most out of their wine. The first is totally free (and surprisingly necessary): start sniffing the stuff as well as drinking it and double the sensual pleasure. The second is anything from moderately to monstrously expensive: drink from decent glasses. 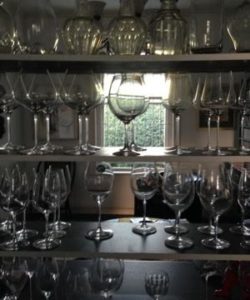 That said, I’ve never been a glass nut, though always having a motley collection of at least fairly good glasses; certainly never suites of glasses designed for different kinds of wine (beyond red and white, and perhaps pinot). In fact I am continually surprised at how many people have been through the extraordinary experience of a Riedel tasting and perforce realised how unequivocally significant the shape and size of glass is in revealing or suppressing factors like tannin, fruit and acid – and yet continue to, basically, ignore the lesson. I’m one such.

Largely immune to the Riedel claims, I could see that the glasses were rather fine objects. My own conversion to pricey stemware was, I’m rather ashamed to say, for reasons more aesthetic than vinous (ok, the two are indeed complexly linked for people like me who believe that the experience of a wine does, and should, go beyond “what’s in the glass”). But when I first drank out of a Zalto glass – impossibly slender, light as air – I was convinced. The absurd cost of the things, though, kept my lust in check. And when I eventually decided to leap, Great Domaines, the importer, was temporarily out of stock.

On cue, Wine Cellar in Cape Town brought in a glass called the Gabriel Glass, designed by Swiss wine critic René Gabriel – one design, supposedly perfect for all types of wine. Having done the Riedel experience I’m doubtful about that claim, but don’t really care: the glass is similar in ineffable airiness to Zalto (and even in its angular design, though with slightly concave, funnelling sides rather than Zalto’s straight ones). Crucially, about half the price. Still hardly cheap – so bang went a nice chunk of my end-of-year bonus when I bought six of them for R2100.

I haven’t regretted the purchase; and I haven’t yet broken one of them – I only use them for a treat now and then, and when I have really good wine to drink – but am sure I will. That’s why I bought six; there’s room to contract….

It occurred to me to wonder, though, if the sales of Riedel glassware in South Africa were being affected by inroads from Zalto and Gabriel, especially as the value of the rand was plunging. So I rather diffidently asked Michael Crossley, a director of the Reciprocal Wine Company in Johannesburg and in charge of their Riedel imports, if he’d mind telling me. He didn’t, and was pleasingly frank (but as his business is clearly booming, why be shy?).

“It is a business that often amazes us”, Michael told me. “The ‘culture’ or desire for real brands in the glassware market is extraordinary, you can’t believe what people are willing to spend on new ranges/replacements etc. Of course there are those who love the brand and it is a real budget issue to purchase, so breakages are a travesty, but there are also those who phone to order fine wine, and ‘just add another 8-pack of  glasses’ while you have them on the phone.”

Reciprocal does over 95% of Riedel’s business in Africa; and it’s a business that’s growing, despite the exchange rate. “We continue to stock a range of Riedels at over R800 a piece.”

As for the new competition, Michael claims to be pleased rather than worried. “You don’t want to be the only vendor selling glasses at R250-plus when your closest competitor is Woolies at R60”, he says. “The other brands help raise the general perception and desirability of these ‘luxury goods’.”

The very rich, I’m reminded, are pretty unassailable. But my six luxurious Gabriel glasses had better see me out.