Tim James: On the increasing difficulty of getting to know world’s more famous wines

At a recent lunch with an eminent English winewriter (at Cape Town’s Waterfront, before he set off with the bunch of British visitors whose Cape wine guide he was to be, as part of the way he ekes out a living in the wine industry), the chat turned to the increasing difficulty of getting to know the more famous wines of the world. Few apart from the very rich get to drink the ridiculously expensive stuff regularly – and just getting to taste it regularly is not easy, even for well-placed writers and sommeliers in the likes of New York and London.

In the introduction to his weighty 2007 tome on The Complete Bordeaux, another eminent Brit, Stephen Brook, shows how this problem affects even someone like him. Many years before, “as a writer with rather slender credentials”, he was guided round a top Médoc château by the owner, and they “tasted at least six different vintages”. The experience enabled him “not just to taste his wines but to understand what the proprietor was seeking to achieve”. A 2004 visit (preparing for a major book, and with chunkier credentials now, he doesn’t need to point out) was a much more perfunctory affair, and he was merely given cask samples of the grand vin and the second wine.

That experience was often repeated, though Brook does point out that “parsimonious wine estates run like soulless corporations are very much in the minority” – but I bet the numbers have increased in the 15 years since then. Hardly surprising, at top domaines in Bordeaux and other places where the cost of opening a bottle is significant for the bottom line – and the bottom line is the most important one.

If that’s what it’s like for Stephen Brook, what about the novice winewriter seeking experience and understanding? Or the sommelier? Or the winemaker? It’s winemakers’ exclusion from great wines, especially mature ones, that’s particularly worrying to me. Armed with the right introductions (if you have good connections), and at the right place, much is possible, especially when it comes to tasting from a cask. I remember how fantastically welcoming a few very great vignerons were when I travelled to the Northern Rhône some years ago with Eben Sadie, his Priorat partner, and the as-yet-unfamous Rosa Kruger: Jean-Paul Jamet, for example, darting around his cellar, giving us sample after sample from the casks, then opening some older bottles. (On the other hand, even for Sadie, the Chaves didn’t even bother to acknowledge our efforts to get an invitation there!)

So, networks of winemakers and sommeliers and wine writers can affect an entry, though with increasing difficulty and fewer rewards the higher the prestige/price chain one gets. And these visits are greatly illuminating about winemaking and infant wines. But it’s too easy to come away, however enthusiastic, without knowing what the serious wine is meant to develop into in a decade or two. This just reinforces the pressure to make wine accessible and charming in youth – because that’s what it’s too often all about, and the sommeliers and wine writers are also not getting the experience to usefully inform their own, increasingly less well informed, interactions with the wine-loving public.

Things are not yet so bad in the Cape, though as wines get more and more expensive it’s getting increasingly costly for winelovers to get to taste them on their winelands visits. When I started visiting estates in the late 1980s and early 1990s, I don’t think anyone charged for a tasting. That started changing soon – despite it not actually being legal to charge (I remember a little flurry about that issue, but it made no difference, and quite possibly the law has now changed in that regard). 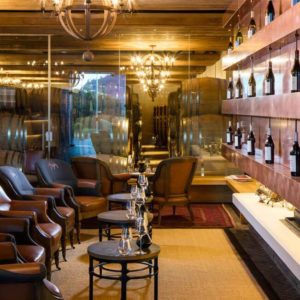 Now charging has become the norm for wineries that receive visitors and offer them tastings. Not universal, but the norm. And it can be quite expensive. Some estates have a more or less elaborate pricing structure, depending on what you choose to taste. At one of the most expensive places, for example, the Mullineux & Leeu “Wine Studio” in Franschhoek, you’ll pay R110 to taste the main Mullineux range (and the same again for the two Leeu Passants) and then another R300 to sample the single-terror wines. For that, you get a smart ambience, unhurried and well-informed service, and excellent glassware, as well as very fine wines. But it’s not something your average Stellenbosch oenology student, for example, can afford.

But what are estates to do? Many, of course, will refund your tasting fee if you show sufficient interest in the wine to buy a minimum amount. Many add to the experience (and the prices) by putting on an array of food-partnering tastings. Wine tourism has become a big thing, and no-one can afford to easily hand out for free large volumes of their expensive wine.

Everyone is being affected by costs, it seems, as wine business becomes ever more of a business. From professionals trying to acquire expertise, to serious winelovers … to not-so-serious winelovers on a binge. All explicable, but some parts of it rather regrettable. As so often, the problems are more obvious than the solutions.