Tim James: On the moon, tides and Waterkloof wines

Every now and then, when I get particularly disgusted at my scientific illiteracy, I grapple with a work of what is kindly called “popular science”. So I’ve just finished James Gleick’s masterly short account of Isaac Newton, eminent grand-daddy, I suppose, of the modern scientific understanding of the universe. By a neat coincidence, I had been reading of his breakthrough accounts of lunar motion and of how tides work when I got an invitation to the launch of two of Waterkloof’s wines from their “inaugural certified biodynamic harvest”.

Waterkloof is now (I think) only the Cape’s second certified biodyamic producer, after Reyneke. Their invitation opened with the question: “Does the moon really affect how good a bottle of wine tastes?” It pointed out that the day in question is a “fruit day” – when wine shows at its gratifying best, according to the astrologically-minded biodynamists (if, indeed, “mind” is the appropriate word). The other three types of day are named for root, flower and leaf. Fruit days are when the moon is in any of the “fire signs” such as Aries, Leo and Sagittarius.

The moon and the lunar calendar are of great importance to biodynamics. Some of the (false) logic seems to be that, well, the moon causes tides, so obviously it’s going to have an effect on anything that’s substantially made of water – like a vine or grape or bottle of wine or, indeed, you and me. There’s no space to go into it here, but (after Newton) any respectable account of tides indicates that there’s rather more to it than the simple gravitational force of the moon. Besides, the effect is only noticeable on extremely large open bodies of water, like oceans; even the Great Lakes are only minutely tidal. Vines or grapes – no.

Meanwhile Newton’s still-meaningful theory of universal gravity made it clear that everything attracts everything else, in fact, and he’d have known that a fruit-fly sitting on a grape is exerting a greater gravitational force on it than is the moon. 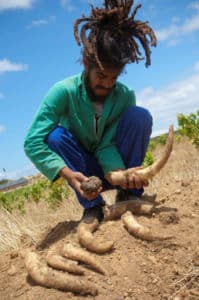 Nonetheless, a good handful of the world’s greatest wine producers (and some dire ones) fervently believe in the biodynamic bundle of astrology, homeopathy, and supernatural mumbo-jumbo generally, even if some of them are rather embarrassed by the weirdest claims and recipes of the Austrian occult philosopher, Rudolf Steiner, who founded biodynamics. Clearly it’s not anything that’s going to harm vines or wines, and I happily agree that the strictly organic and labour-intensive farming regime can only do good, whatever the values of using cow horns to “ray back the living and astral properties into the inner life”, etc.

Incidentally, Isaac Newton’s thinking also had thoroughly pre-Newtonian aspects, including his devoted researches into theology and alchemy. Other great early scientists were also touched by the beliefs of medieval magic – both Galileo and the great astronomer Kepler dabbled in astrology and horoscopes and would undoubtedly have been less immune to the quaint charms of biodynamics than most modern scientists.

But these are large matters, and there’s no room for more than a few jibes now. (A good sceptical look at biodynamics may be found here.)

As to Waterkloof, I have always admired their wines. Unfortunately I’m unable to attend this launch, but I have recently tried another couple of (non-biodynamic) wines to be officially unveiled that day: the Cinsault and the Chenin Blanc in their mid-priced Seriously Cool range. Both 2015s, off old, dry-farmed Helderberg bushvines, vinified with minimal intervention.

I particularly like the fresh, lovely and characterful Chenin (a fine buy at R95), with its hint of spice, perhaps from the oak maturation. Delightfully silky, its roundness braced by fine acidity, with everything in balance and a real feeling of alertness, energy. The medium-bodied, light-feeling Cinsault (R120) is also fresh, with full-fruited aromas. There’s sweet fruit on the dry palate, with ripe fruity flavours and an engaging light tannic grip. But I do find the prettiness, the charm, just a little too confected for me. I should perhaps try it again on a root day.