Business magnates don’t always make the right decisions – or appoint the right people to do so – when it comes to their wine estates. While, for example, Johann Rupert, did well in getting (though later losing) viticulturist Rosa Kruger for L’Ormarins/Anthonij Rupert, the grand new cellar for a long time didn’t turn out wines commensurate with vineyard quality or cellar splendour. (It’s unfortunately been a while since I’ve tasted the wines, so I don’t know how true that still is.)

And there were, I believe, significant early vineyard-planting problems at Babylonstoren, Koos Bekker’s great Paarl project – though the Babylonstoren wines are increasingly satisfactory. It is, though, at Lourensford, which Christo Wiese acquired in 1998 and has since spent vast amounts of money on, that we can infer the widest scale of poor viticultural planning at least. There were some 250 hectares of vines initially planted, and at least 100 more by a decade or so later. Now, a mere 20 years after the first vines went in (into the wrong places, many of them), hundreds of hectares have been ripped out, and a mere hundred or so remain. The cost implications of it all must surely have made the owner gnash his teeth (not quite on the scale of Steinhoff, but still).

Lourensford is a huge and magnificent property – some 4000 hectares, including forest, fynbos and fruit orchards as well as vineyards – on the slopes of the Helderberg and in the Lourens River valley, just outside Somerset West. It was once (along with Morgenster) part of the original vast Vergelegen of Willem Adriaan van der Stel, before that was broken up in 1708. 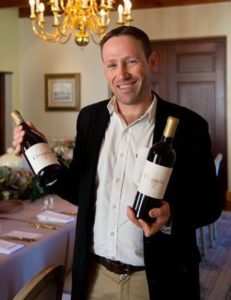 It should be a great South African wine estate. One of the country’s most technologically advanced production cellars was built there after Wiese reintroduced vineyards and winemaking. But the wines in the early years were lack-lustre. The young, ill-planned vineyards will have played their role, but things started improving greatly when Chris Joubert became cellarmaster in late 2007. He was succeeded four or five years ago by Hannes Nel – who’d been there from the start, though he was first listed as the resident oenologist – with Timothy Witbooi (another long server, since 2005) as winemaker.

A few decades of some turmoil, then, and of hard decisions taken. But by 2013, when Platter noted that 118 hectares had already been uprooted, the Lourensford entry in the Guide was already showing a bevy of four and four-and-a-half star ratings.

The wine ranges over this whole period have, not surprisingly, reflected that turmoil (or is marketing simply yet another problem?). An Eden Crest range was introduced, and lasted scarcely longer than the Five Heirs range which followed. For a few years the 1700 wines were the top of the pile. A River Garden range was introduced. Then a First Fruit range – by which time there were no longer the 1700s. The total number of wines has steadily declined since their greatest flourishing.

It’s impossible to establish anything like a coherent wine image for Lourensford when this is happening. And it is still happening, unfortunately. Recently a range called The Dome has come in to cover the majority of the wines, and it looks like River Garden is on the way out. And now, tah dah!, there’s a new flagship range of two blends, red and white, called Chrysalis: handsomely packaged with elegant, minimalist display labels, gilt wax capsules, appallingly heavy bottles which accord ill with Lourensford’s “green” credentials, and back labels speaking the eloquent trash of copywriters with a “concept” gripped triumphantly in their jaws.

Both blends are from the fine 2015 vintage. The red blend is cabernet sauvignon, merlot and cab franc. Good dark fruit aromas along with oaky stuff mixed with varietal cigar box stuff; plenty of flavour, with obvious oak (about 80% new barrels) – but not too much for still-youthful wine. A beautiful tannin structure that is ripe and firm but not prohibitive even now. As for alcohol – the website says 14%, the label says 14.5%, and the hints of sweetness and warmth suggest to me the latter is closer. A very good wine, if not quite at the top of Cape Bordeaux-style blends. About R430 retail.

The white Chrysalis is from sauvignon blanc, chardonnay and viognier, with a complex oaking regime in mostly older barrels. The blend works very well, both in being a fine wine and in that none of the components stands out – though of course you can find chardonnay citrus, sauvignon freshness, viognier peachiness, etc, if you want to look. Vibrant and fresh and satisfying; even rather elegant in a rich way, with a little rounding sweetness on the finish for charm. I really like it, and out of a whole lot of open Platter bottles chose it for my dinner accompaniment this evening. Not excessively pricey at R300, as things go.

Clearly Lourensford winemaking is in good hands. We must hope that, now the worst of the viticultural problems have been sorted out (it seems), all goes well and things settle down. If so there might be more Chrysalis wines, rather than the brand metamorphosing into something quite unexpected.