Tim James: On the paradox of more wine from fewer vines 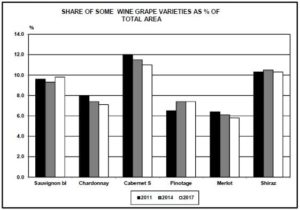 For statistics junkies it’s that exciting time of year when Sawis issues its annual booklet of selected statistics. Now available on their website (along with other interesting stuff) is SA Wine Industry 2017 Statistics Nr 42: the compilation of tables and graphs relating to South African wine as at the end of 2017 – everything from production to consumption, from plantings of vines to uprootings, from the types of containers it gets sold in, to how much gets exported. Etc.

Not all is equally fascinating – and there remains the very serious problem that for many of the statistics different wine regions are combined (Constantia and Durbanville within Stellenbosch, etc). But much that’s useful for gaining understanding is there. Sometimes it’s necessary to do a bit of digging around. Not all questions are answered, but there are a lot of figures to enable one to answer some more – and sometimes to ask a few more. I’ve come up this year with a question that I’d much like to be answered. Though I think the answer might not cheer those convinced that the quality of all Cape wine is improving.

I’ve been looking at figures around the extent of the South African wine industry. It’s not news that vineyard hectarage has been in continuous decline since 2006. The current compilation shows figures back to 2010, when there were 101 017 ha; now there are 94 545 – quite a fall (which some people think is understating the true picture, but let’s leave that aside for now).

What about the wine produced off those hectares? One would surely expect the harvest to decline in proportion – with annual variations owing to climatic factors. But, extraordinarily, the size of the harvest has been inexorably increasing as the total vineyard has been shrinking.

One doesn’t need to be a statistical or a vinicultural genius to see that there’s only one way you get an increased volume of fruit from a decreased area of vineyard: higher yields.

Which raises these questions:

I reckon getting an answer to the second question will help answer the first. The third question is the tricky one. One doesn’t need to fetishise low yields, but it’s seldom that really high yields give good quality wine.

My initial hypothesis would be that it is the bulk-producing regions (basically the hot, heavily irrigated areas) that are producing a great deal more now than before, and are disproportionately responsible for the increase. It would be “improved” viticultural techniques – clones and rootstocks chosen for their productivity, more effective irrigation, better canopy management, cleverer fertilisation and disease control, etc – that are raising crop yield. Such things would also have an effect in areas like Stellenbosch, Cape South Coast, Constantia, etc, but probably it would be greatly less. 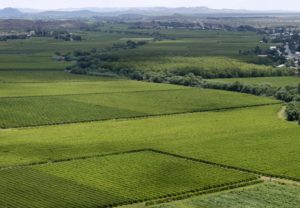 I turned to another booklet of statistics to help establish the basic facts (South Africa is unusually well served by this kind of material). The VinPro Cost Guide 2017/18 shows the average yield per ton up from 15.34 tons per ha in 2006, to 17.58 in 2016 – gradually rising over the period, but with relative ups and downs. Yields for different areas are given only for 2016. Here the lowest average yields are 7.02 t/ha in Malmesbury (basically the unirrigated Swartland, in a dry year) and 8.71 t/ha in Stellenbosch. The highest are Olifants River (23.83 t/ha), Klein Karoo (25.23 t/ha) and Orange River (a staggering 30.9 t/ha). I must get hold of that breakdown for all the years.

But clearly we must wonder: Is this all a sign of a laudable improvement in viticulture which is also leading to better wine quality? Or is it further evidence of the race to the bottom in the Cape’s bulk-wine-growing industry, where producing more but at lower wine prices is seen as the way to go?