“These are potentially some of the best winelands in the Cape”, says winemaker Chris Alheit about Ceres, that high-lying inland plateau better known for deciduous fruit, especially apples and pears. He says it both hopefully (because he has some infant vines there and further planting plans) and ruefully – because he knows that wine-grapes are unlikely to ever compete successfully with more lucrative crops in winning the hearts of most local farmers. 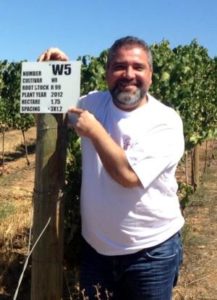 Razvan Macici would doubtless agree about the potential. He’s the man substantially responsible for building Nederburg’s excellence over the past 15 or so years, and now Distell’s Chief Winemaker, responsible for style and quality across the mega-company’s brands. Last week I travelled with him (and Distell viticulturist Henk van Graan) from Nederburg HQ in Paarl to the vineyards which Distell is sponsoring and exploiting (I’m not sure of the proper words to describe the relationships involved) on Alhambra, a large fruit farm in Ceres. Razvan was particularly keen to see the first viable crop of riesling.

Riesling is a grape which could perform marvellously in these cooler conditions. It’s what Chris Alheit chose for his first plantings there (I wrote recently about his new vineyard on here). And, together with sauvignon blanc and pinot noir, other varieties which appreciate cooler conditions, it’s what Distell is growing here on Alhambra with its owner Peter Graaff (of the distinguished larger family which owns the De Grendel wine estate in Durbanville). Plans are to increase the plantings of the three varieties to about 22 hectares, with the fruit destined for the grander labels in the Nederburg portfolio.

This vintage, 2016, will be the first riesling crop, and Razvan, already sketching in his mind his vinification plans (for he intends to be hands-on involved) is eager to see how the grapes are doing. As we leave the village, he pays exulting attention to the dashboard reading reflecting the outside temperature. The numbers have been dropping for a while, and do so dramatically as we continue to climb the Bo-Swaermoed road. Right down to 15 degrees Celsius it goes, to Razvan’s manifest delight – great for riesling! That’s not to say it never gets hot here – the previous week temperatures rose into the 30s, though there’s usually a big diurnal variation, with cool nights.

All proves to be well with the vines and the grapes. The problems that have beset many parts of the Cape this year are blissfully absent. These vines are irrigated, and the water hasn’t failed, nor has heat been prolonged, burning and extreme. Razvan and Henk van Graan are happy, and discuss picking dates for the different varieties. To the newcomer, me, it all looks great, and the grapes taste sweet and ripe. Late-ripening riesling least so, perhaps, with exciting acidity. No hurry to pick these grapes (Razvan tells me now that they are to be harvested this week).

I’m looking forward to the wine they make even more since having, this Sunday evening, opened the bottle of 2013 Private Bin Pinot Noir with Razvan gave me, the maiden vintage from the vines amongst which I was wandering a week ago. I confess I’ve been seduced into more voracious imbibing than I intended. It’s impressive and delicious stuff. I’ve had a lot of pinots recently, including most of the 2014s from the Hemel-en-Aarde area, as well as a varied lot of burgundies. This wine, destined for the coming Nederburg Auction, compares well with the best. The deep, vibrant colour would make many Hermanus producers weep (or spit) with envy. The balance is superb, with the reticent tannins I like in pinot, but the guiding acidity integrated and fresh. A lovely, polished, drinkable harmony – though no great complexity, perhaps, in the dark cherry fruit (while there’s satisfaction in the spicy, savoury edge), but that will come as the vineyards mature and there’s surely no doubt about the potential of Ceres.