Tim James: On the relative nature of natural wine

There are some things which we are sometimes tempted to think of as absolutes but are better appreciated as relative – as existing on or as a continuum. Ripeness, for example. It’s not only the writers of gushing back-labels who believe in the concept of “perfect ripeness”; many winemakers and critics seem to think of ripeness as a precise point (they invoke “physiological ripeness” to make their position sound scientific) whereas really it involves a question of settling on one of many possible points for reasons of personal or market preference. Some might consider, say, the lovely Testalonga Redemption Syrah as made from under-ripe grapes while others will regard the equally impressive but vastly different Saronsberg Shiraz as over-ripe. In fact, both are easily demonstrable as within the parameters of ripeness: from no-longer-green to not-yet-“dead fruit”. 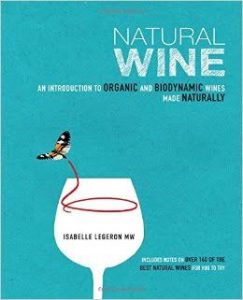 “Natural Wine: An introduction to organic and biodynamic wines made naturally” by Isabelle Legeron.

Another example that I’ve been thinking about recently is that rather fashionable thing “natural wine”. We know what the naturalistas are getting at – they are above all avoiding chemical interventions in the growing of their grapes and the making of their wines, and also avoiding some interventions which are, in fact, physical, but dependent on machinery: such as machine-harvesting or filtering their wines. But other physical interventions are certainly not avoided – some of them scarcely “natural” at all – from preparing their soils before planting (deacidifying them, perhaps, by adding lime) and then planting their vines on rootstocks and training them on trellises, all the way to the use of air-conditioning. In fact, there’s nothing much natural about a vineyard, and the most natural, non-interventionst result of fermenting grapes is vinegar.

There is, inevitably, a continuuum of “naturalness”. At one end (and this is how most wine in the world is now made), maximum human intervention with the aids of the agro-chemical industry (pesticides, fertilisers, herbicides etc) and the delights offered by sellers of yeasts, enzymes and dozens more permitted additives. At the other end, minimal intervention beyond human (and sometimes animal) effort in vineyard and cellar. Neither end is totally divorced from natural or unnatural features. And there are indeed a number of positions taken by grape-growers and winemakers along the way.

For example, most of the “new wave” wine producers in the Cape are pretty close to the “natural” end – but in some people’s opinion fail lamentably to meet the fundamentalist standards, falling down mostly, probably, in the non-organic origins of their grapes. Many more traditional growers and makers of fine wine have shifted significantly in this direction. Incidentally, some of the practices associated with “natural” winemaking – such as lower alcohol levels – have nothing inherently natural about them at all: I suspect that particular shibboleth came about because of the association of bigness and power with the highly manipulated wine at all levels of production.

It was a stroke of genius, of course, for the modern movement to call their wine “natural” (though many of its adherent resist the term, nor does anyone find it easy to define). It has an obvious appeal, and carries the implication that all other wines are “unnatural”. It’s a bit like anti-abortionists banding under a “pro-life” banner, implying that those who disagree are “anti-life”.

The niche fashion for what we are too easily agreeing to call “natural wines” (those at one extreme of the continuum) might or might not continue with its current fervour – I hope it does. But winelovers all, I think, have every reason to be grateful to their makers for reminding us so insistently of the arguably unacceptable unnaturalness of a lot of “industrial” wine.