“My new life is in the vineyards”, said Eben Sadie at a recent trade tasting of his new releases – the two signature blends of 2016 and the Old Vine series wines of 2017. It’s clearly not only the particular difficulty of the last two drought years that’s been pulling him out of the cellar, although the ravages of heat and drought brought extra demands, not least around harvest time. The fruit of 48 vineyards, from Stellenbosch to Clanwilliam, comes into the Sadie winery on the Paardeberg, and each block needs to be picked at its best – one of the most critical decisions any winegrower must make. 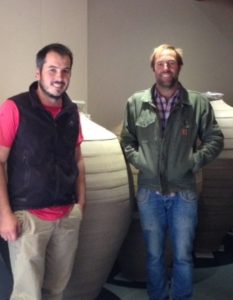 But Eben is now clearly very happy to leave most of the cellar work under the control of Paul Jordaan, who’s been working there a few years now and is the “main vinifier”. He even joked (I think it was a joke) that he was particularly pleased that Paul must take the responsibility for the vinifications of the past two “very tough” vintages.

Generally, Eben says of Sadie Family Wines, practices have been “good in the vineyards, very good in the cellar”. The way forward is clear: “We’ll reach greater wines if we can do the same in the vineyards. I had to get out of the winery. My new life is in the vineyards.” Those vineyards are, remember, for the most part, being worked together with the farmers who own them – Eben himself owns only the recently planted vines on the small farm where his winery is; viticulture on these others is, however, controlled by him to different degrees.

Palladius and Columella have from the outset been works in progress, with no varietal recipe, no winemaking formula. Conceived as blends expressive of nothing more restricted than the Swartland as a whole, they’ve given Eben scope to take them ever closer to his idea of perfection. Many years ago he even told me that “building a great wine is not the work of one generation”, and there’s no question that great wine is his goal, however long it takes to get there. So these two signature wines have responded to changing vineyard possibilities, with new varieties becoming available for the blends, as well as to ever-greater refinement in the cellar. Working with the Old Vines Series has also been influential. Undoubtedly also, if I may get basic, now having a great deal more money to spend on vineyard work and cellar equipment must make a substantial difference, as did simply having more time available for his South African wines after he worked his final European harvest in 2010. 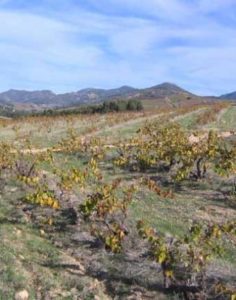 Indeed the changes have been remarkable, as one can see from these 2016s, due for general release at the beginning of August. The first few vintages of Palladius were largely of chenin, viognier and chardonnay, matured in old barriques, some of them approaching close to off-dryness. The 2016 has 11 grape varieties, from 17 vineyards – enough to underline the fact that this is not a wine designed to express varietalism (or small-scale terroir), though chenin remains its heart, its percentage having remained pretty constant, and expressing the Swartland is its aim. Eben speaks of preferring the “more introspective, less showy grapes” (he used to say he had to whack viognier on the head with oxidation). This wine spent its first year in clay pots and concrete “eggs”, then the blend matured for a year in large oak casks. Another notable change: this is the first Palladius to be under 13.5% alcohol.

There’s an interesting green shimmer to this wine, in appearance and on its aromas, which are still quite closed. The palate opens up to more splendours, with a quiet intensity and a marvellous texture. All those varieties are submerged in the whole. The neutral environments of clay and concrete have allowed greater precision and focus, which somehow enhances the way the very dryness of the wine participates in its effect. Such purity, such length. There’s no question, although some single-vineyard Cape whites are achieving deserved brilliant success, that this blend remains at the peak (not alone, thankfully) of the category.

Columella has changed no less radically. Columella 2000, a very fine wine and still drinking extremely well, was of syrah with less than 20% mourvèdre (it had to be more than 15%, so that no-one could accuse it of being a varietal wine!). Now four other varieties have joined the blend, with the syrah component progressively diminishing – it’s under 50% for the first time in the 2016. That first wine was matured in barriques of which 60% were new. Now the new oak component is down to 8%; after a year in barrels, the wine goes into big oval casks for another year. The alcohol level has fallen over the years – with 2009 being perhaps the breakthrough year in terms of greater freshness and sense of lightness.

What to say of the 2016 that’s vaguely adequate? Spicy, with bright red and darker fruit and an earthy quality too, it has austerity coupled with generosity. The tannin structure is excellent and thrilling, refined and melting, unobtrusive yet counting every moment. This makes the wine surprisingly drinkable already. But if you’re lucky enough to get some, and you can restrain yourself, don’t be tempted for years.