For many years now, Michael Fridjhon has been offering a tasting of older Cape wines at the Grande Roche in Paarl on the day before the Trophy Wine Show judges settle down to the harder task of working their way through many hundreds of much more youthful versions. The laudable intention is primarily to give the international judges a different perspective on those young wines, but some of the local judges and a few outsiders are invited, and I’ve been privileged to attend most of them.

The wines – 41 on this occasion – are not especially chosen for their known high quality, and there’s always a bit of hit-and-miss, with a few egregiously oxidised ones sniffed and discarded before being served. This year there were also (a rare occurrence) a pair of corked wines which proved impossible to get anything useful from. The reds in the tasting must be 25 or more years old, whites 15 or more. Here are a few remarks on some of those in this year’s line-up. 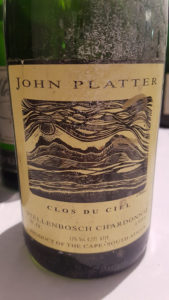 The star of the whites for me was the Clos du Ciel Chardonnay 1996, from John Platter’s tiny place on the Helderberg foothills. The founder of the eponymous Wine Guide only made chardonnay there, and this one is still very good. Mid-gold, it was lighter in colour than the Springfield Méthode Ancienne 1997, which still had some life and flavour, with a balanced acidity, but was past its best. The Clos du Ciel was still quite fresh and linear, with clear chardonnay fruit flavours still in evidence, plus some nutty hints of oak; a creamy, lemony finish.

More remarkable in some ways, though nowhere near the chards’ inherent quality, were two older KWV “Rieslings” – i.e., made from crouchen /Cape riesling. Neutral but nicely balanced and very much alive – even the 1979. (I wrote more about these here.)

The pinotage flight of four wines was not very impressive; I most enjoyed the Oude Libertas 1972, certainly volatile, but with some pleasing fruit still, and savoury notes, over a firm but well developed tannic structure.

Cabernets from the 1980s (Warwick 1986, Kanonkop 1985 and Overgaauw 1982) all showed the added-acid hardness often associated with that era. I quite enjoyed the slightly rustic Overgaauw, with its dried herb notes, and feeling of seriousness, of classic austerity.

The 1970s were much better (except for a grim Groot Constantia 1973), with the straight Nederburg 1978 showing as well as the Nederburg Auction 1972. Both (which would have included other grapes too, especially cinsaut and shiraz, probably) evidenced good evolution rather than simply age. Both had real charm, with some sweet fruit – the 1972 notably ripe and perhaps a touch porty. The Zonnebloem 1966 was also impressive, with a real forcefulness of presence, structure and fruit – though I found it a bit clumsy, and certainly past its best. Unfortunately the GS Cab 1966 was not a very good bottle (it had a low ullage), though there was certainly evidence of what a brilliant wine this can be at its best.

The shirazes were all decent enough, and I think some liked all three more than I: Bellingham 1980, Meerendal 1978 and Zonnebloem 1976, but I found all a touch clumsy and sweetish – yet also with a hint of greenness which actually gave a note of freshness. The fruit-rich, herbal and firmly built Meerendal was my favourite.

A very surprising success was the Muratie Pinot Noir 1981, which had some recognisable pinot character on the nose, and some characteristic silkiness on the palate, though acidification did help make it a little hard. But I’d never have expected it to be even alive, let alone drinkable and recognisable!

The best of all the 1980s wines, however, was Welgemeend Estate  1988, which was always one of the most elegant red Cape labels through the decade. Well-structured, lightly spicy, lively and fresh, with sweet fruit showing through the slightly too-bright acidity. But I’d have been happy to have a bottle of this to drink. Of the blends, this was my favourite – over (amongst others) Kanonkop Paul Sauer 1983 and the drying-out Uitkyk Carlonet 1974.

There were others that deserve a mention too, but that’s enough for now.