Tim James: On the state of wine festivals 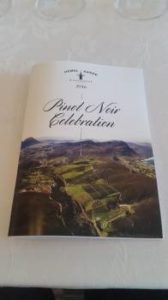 I could easily become a wine festival junkie, given the chance – and if I could afford it, though I suppose that a signal point of junkiedom is always managing to fund your fix. Anyway, I can say with pleasure as well as pride – not many can make the claim! – that I’ve attended all of the Swartland Revolutions and all of the Hemel-en-Aarde Pinot Noir Celebrations.

The third of the latter happened this past weekend and was another great success (let’s not cavil over some problems at the Gala Dinner). I had a marvellous time in the company of winelovers from all over, and learnt a lot, even beyond the experience of the presentation of all the most important 2014 pinots from the area. I’ll write at greater length about these wines elsewhere: my basic conclusion is that I went expecting not great things from this challenging vintage in the area, and my opinion was pleasantly corrected by a number of good wines, with more perfume and structure than I’d thought likely; though I do think discrimination is called for, as not all the wines equally surmounted the difficulties of the 2014 harvest, though none were poor.

Among the strengths of this festival, and the Swartland one, apart from the intensity of an experience lasting over a few days, are their outward-looking nature – with many tastings of, or including, foreign wines – and, connected with this, the educational value. I have no problem with, for example, the Stellenbosch Wine Festival, less geekishly offering itself to “wine and food lovers, families and those in search of a great day out”, and it has the advantage of being able to accommodate vastly more people than the more concentrated festivals can; but, well, leaving aside golf and concerts and mountain biking, there’s not a whole lot of wine stuff on offer that’s vastly different from what the area’s tasting rooms offer all the year round.

Constantia, regrettably in my opinion, opts for a focus much wider than its homeground, with the annual Constantia Fresh (the next is on 28 February – book here). This gives it perhaps the air more of a commercial event rather than a cultural one celebrating the wines of the area – but it is a great and welcome occasion.

To the anguish of many, the Swartland Revolution is no more, but perhaps more energy is going into the public event of the Swartland Independent Producers – the “Wyn, Kos en Kultuurskou”. This year it’s not going to be in Riebeek Kasteel but the somewhat less charming but more commodious show grounds in Malmesbury. It’s not, as I write, being advertised on the SIP website, but tickets are already available here. It appears that R250 will get you live music, something called a “pulled pork slider”, and “one tasting voucher” for each of the 20 SIP producers (and don’t expect to find Eben Sadie wines, as the great man of the Swartland has not so far elected to put the SIP sticker on any of the qualifying Sadie Family Wines). If that means just one wine per producer may be tasted without paying more, it’s pretty expensive, perhaps, compared with the R1800 I paid for my Pinot Celebration ticket, which bought me many dozen wines, for drinking as well as tasting, including Burgundy Premier and Grand Crus and other expensive foreign and local wines, and a great deal of excellent food. No boereorkes, admittedly.

Stellenbosch is R180 basically, for tastings from 148 wineries, with the fancier tastings and experiences on a pay-as-you-go basis. Supermarket sponsorship clearly helps here. Constantia Fresh costs R495, for over 200 wines, and “gourmet canapés prepared by some of Constantia’s most talented chefs” (with no major travelling expenses for Capetonians as a bonus).

But here’s the great news for afficionados of proper festivals offering something deeper than wandering around tasting a lot of current releases. It seems, from what Iona’s Andrew Gunn let slip to me at the Hemel-en-Aarde do, that Elgin will next year be joining the party, with a festival focusing primarily on the area’s splendid chardonnays. That promises to be a fine addition to the Cape’s wine culture – or at least its more elitist part. I can’t wait.