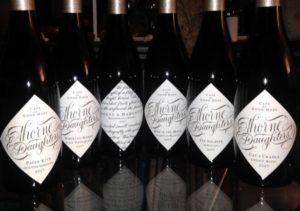 John Seccombe is a winemaker who tends to pick grapes fairly early for his Thorne & Daughters range. His wines inevitably give an impression of precision, freshness and lightness, even delicacy, but John never fails into the trap I referred to on a recent posting when I wondered how seriously we should take very light reds – the loss of expressions of variety and terroir.

There is only one Thorne & Daughters red, in fact, but it is made almost entirely from the two varieties I mentioned as particular favourites of the ultra-light brigade: grenache and cinsaut. There’s also 8% mourvèdre in the 2017 Wanderer’s Heart – which might initially sound an odd combination, but after all it is another Mediterranean variety. It adds some darker breadth and depth and contributes to the sheer deliciousness of the wine, and something (or everything) is giving a very fine, powder-tannin grip – I like to think that’s the Swartland component, but in fact the grapes come from a wide area of the Western Cape.

If John’s wines all apparently flirt with the easy charming drinkability of insubstantial lightness (but, as I say, the flirting doesn’t go far), they also play in the space between intellectual thoughtfulness and sensual pleasure – sometimes closer to the one than the other. I became more aware of this as I tasted though the 2017 Thorne & Daughters range with John at the winery in whose cellar they are made: Gabrielskloof, in the Overberg. (Cellar comrades Marelise Niemann of Memento and Peter-Allan Finlayson of Gabrielskloof and Crystallum were also there with their splendid wines, but that must await further blogs.)

There are two new small-volume Thorne & Daughters wines, their names continuing the childhood game-and-fantasy theme established for the whites. Cat’s Cradle is a Swartland chenin at the intellectual end of the range, perhaps, even a touch austere in its structure, after the hint of floral fragrance, with an appley note. I think it needs a year or two to blossom, but the fruit is there for it to do so. And all the general virtues I mentioned in my opening paragraph.

Man in the Moon is a clairette blanche, from the same vineyard that Craven Wines get their fruit and, like, the Craven Clairette, this has a skin contact component – which is not so obvious as to make it a winemaker’s wine rather than a vineyard one. Just under 12% alcohol and notably fresh, light-feeling, bone-dry, with plenty of aroma and flavour but something that I noted as a “severe succulence”. There’s a spiciness, no obvious fruitiness, and I was grateful for John’s suggestion of “salt-preserved lemon” as part of the savoury character. I hope all that doesn’t suggest its not very appealing, because it is. Not exactly a fun, pool-side quaffer perhaps. Oh, and it’s a touch cloudy from the lack of fining and filtration, if you happen to care about that.

There are two established semillons. Tin Soldier is from the red version of semillon (all from the Swartland in 2017, for the first time), the grapes a week or so on the skins to give the lovely old-gold colour. Quiet aromas, hints of red fruit, lemon and pepper, but as with the flavours subtle would be the better word. A powdery fine tannin and a gorgeously elegant acidity that is its great joy.

Paper Kite Old Vines Semillon is also ex Swartland, also well under 13% alcohol, also a wine of great finesse and subtlety, also with an intensity revealed in the long-lingering flavours – but moving to the more sensual end of John’s aesthetic, more obviously delicious.

And further still in that direction is Rocking Horse Cape White Blend, with roussanne, chenin, semillon, chardonnay and clairette this year contributing not vastly different proportions. Notes of sweet peach and dry herb in the magical whole, and a brilliant acidity in the already achieved harmony. A rollicking alcohol, by John’s standard, of 13.7%! And a touch richer than the others – aided by a very little more sugar, though it’s still totally dry, especially given the good acid.

Is it a confession of sensuality rather than intellect (as I categorised the Thorne & Daughters spectrum) if I say that my two favourites were Rocking Horse and Wanderer’s Heart? I admire the subtlety and finesse of all of John Seccombe’s wines, but the greater generosity of these two, with no loss of freshness, refinement and delicacy, puts them for me in a special class.

These 2017s have already been exported to some destinations, I believe, but are to be released in South Africa on this coming Monday, the first in July.

Some wineries go through troubled times, with much chopping and changing, before they settle down with an established wine aesthetic and – often it seems to be the vital element...