One of the most undersung achievements in South African wine this century could well be Radford Dale: it’s not easy to think of many producers who’ve grown from literally nothing two decades back (first bottling 1998; just two wines), into the maker of over 40 000 cases of well-reputed – and mostly fairly expensive – wines. Winery and vineyards are not owned: the Stellenbosch cellar is rented, and most of the vineyards are now on reasonably long lease arrangements – and I mentioned last week that they’re now planting their first vineyard, of gamay, in collaboration with a top Stellenbosch farmer.

And while much of Stellenbosch wine production is marking time compared with the exciting developments of some other areas (Swartland, Hemel en Aarde, Elgin for starters), one must recognise the forward-looking nature of Radford Dale. I’m not thinking of the fidelity to screwcaps of one of the earliest eschewers of cork, but the commitment to hands-off winemaking and an ever increasing tendency to naturalness and freshness in the wine, with modest alcohols, spontaneous fermentation, and new oak kept to a minimum, for example. Unquestionably the hard work and vision of Alex Dale is to be most credited for the achievements, though there is now a substantial team in support.

The comparatively low visibility locally is probably connected (though the direction of cause and effect must be unclear) to the fact that 80% of the wines are exported. It must be said, though, that some of the marketing has been unimpressive, with mostly dull labels – but those in the Land of Hope range are delightful – and the nomenclature confusing. The overall name “Winery of Good Hope” has now been abandoned in favour of Radford Dale, the name of the most prestigious range, which must be a good thing. Interestingly, ploughing through back issues of Platter, I find that this was in fact the original name (referring to then sole owners Alex Dale and Australian winemaker Ben Radford, the latter working for Longridge, where Alex had also been involved). Then Vinum was born as a sister range, and then the two were combined in The Winery (website: the funwinery.co.za, another pleasant but confusing move), which morphed into The Winery of Good Hope (WOGH) at some stage, before morphing all the way back again. Although there’s still a WOGH range – but no, it actually seems to be treated as an entirely separate producer online. So I’m still a bit confused. Let’s hope the morphing stops now. Either I must concentrate better, or they must. 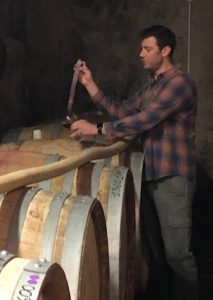 I spent a morning last week with “viticultural and winemaking supremo” Jacques de Klerk (that’s what the website calls him), and Tom Prior of the sales team. Apart from the visit to the new gamay vineyard with Jacques, it was mostly chat and tasting. Having reported on the gamays, and taken a sideswipe at the extremely “natural” Nudity Syrah, I thought I should for space reasons ignore some of the other wines I tasted, like the pinot noirs from Elgin, and mention what is to my palate the most interesting and successful twin-focus of Radford Dale: chenin blanc and pinotage.

This pair constitute the two wines in the Vinum range (opaquely to be found under “Out of Africa” on the website) and well represent what Radford Dale is doing with the varieties. The Pinotage 2018, fermented with whole berries but no stems, combines aromatic vinosity with freshness, ripeness and restraint; with modest but informing tannins, sweet fruit and a good dry finish. Lovely. It’s R160 ex-cellar and perhaps this range represents the best quality:price ratio from this producer. The Vinum Chenin 2017 is R150. Partly barrel-fermented and -matured, a portion made with skin contact to give a little extra grip, it offers intensity and complexity, with a kernel of delicious sweet fruit to complement an earthy, leaner element.

The WOGH versions are also very appealing wines, but if you can find the extra R50 that the Vinum wines cost, I reckon those will give more than adequate reward for the extra. As to the top-range versions, well, they are undoubtedly first-class, wholly admirable wines. Renaissance of Chenin Blanc 2017 is from old, unirrigated Stellenbosch bushvines. At just 12.5% alcohol, it is subtle, refined  and exciting; if you were to look for an international comparison for the general vinous character of the wine, I’d suggest not the Loire but Burgundy, despite the varietal shift. And if that’s true, and I believe it is – and good burgundy at that – how could I cavil at the idea of paying R395 for it?

The similarly priced Frankenstein Pinotage is named for Professor Perold, the man who created a monster by yoking together disparate elements. But if there’s a bit of ironic distancing in the name, or once was, Radford Dale has clearly become fully committed to the grape, and is amongst the leaders of the small but important group of producers that are stressing the grape’s connections to Burgundy (again!) and the south of France, rather than to the less appropriate model of Bordeaux which has dominated most Cape strivings with the grape. Frankenstein 2016 is fermented half wholebunch (ie with stems), half whole berry. Along with its fragrant charm and red/black fruit character, it does have a herbal stemminess which I find winning. Clear, pure-fruited and fresh, it also has a serious but not egregious structure to support its many more obvious delights.

Radford Dale should be an obvious direction in which to turn when thinking Stellenbosch.