Wine packaging seems to be having a bit of a creative time right now. How would you feel about flat bottles, for example, to add to new concepts already being digested? In the piece I wrote last year for the current Platter guide about “Some trends in South African wine”, I mentioned one bit of innovation as “wine ‘on tap’ from kegs or in larger format glass ‘growlers’ (concepts familiar to beer-drinkers)”. As for wine-in-a-can, I wrote that it’s “making some headway in the US, for example, but not (yet?) here”. That remark was made just in time: soon after publication late last year, the first canned wines were becoming available in this country. By late January, on this website, Christian Eedes was welcoming a handful of them, and finding that at least the CanCan La Goulue Chenin Blanc 2019 from Renegade Wines was pretty good stuff.

One of the Renegade team is Francois Haasbroek, and he tells me that things are looking very promising for the concept of canned wine (though of course, the lockdown rules are not helping right now), with the supermarkets, crucially, “exceptionally excited” on the whole. There seem to be at least eight individual local brands available, and perhaps “another 15 in the works” – though at present there is just one mobile canner, with a few months’ waiting list. 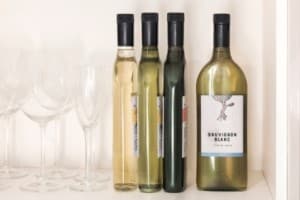 Fits through your letterbox.

Wine-in-a-can should provide a very valid packaging answer to some problems – Christian spoke of “getting the cooler box halfway up Table Mountain”. Another set of problems, especially related to home delivery, seems to be the target of another packaging innovation, a flat 750 ml bottle made of 100% recycled and recyclable PET plastic. Its inventor, Santiago Navarro, co-founder and CEO of Garçon Wines, has been quoted as saying that the project “came from wanting to make a success of home wine delivery in the UK” – for one thing, this bottle can be delivered through a standard letterbox-slot. Beyond that, it’s a shot at “creating a 21st-century wine bottle”.

The bottle has been on the market for a year or two already, but there’s one real problem – how to fill it with wine, as it’s obviously not compatible with existing bottling lines, and bottling lines are expensive.  (That was to a lesser extent a problem with filling lines for wine-in-a-can, especially as those are almost inevitably set up to cater to vast volumes, but adaptation to the needs of wine seems not to have been a major problem.) But international giant Accolade Wines is clearly convinced by Navarro’s flat bottle, with a flat bottling line at their vast bottling plant in Bristol, England (and I believe that it’s also going into production in the USA). Already some of Accolade’s brands are available in the flat bottle, including the major Hardy’s label. I don’t know if any Cape wines are included yet – I tried but couldn’t get a response in time from the local Accolade supremo, James Reid.

Innovation comes slowly to wine packaging – it took ages for bag-in-box to become mainstream; the debate over screwcaps continues and not everyone has been convinced by that. There have been other “exciting” developments, including pouches, especially for wine designed and destined for immediate drinking. Standard PET bottles don’t seem to have made a great impact, despite their useful un-breakability and their environment-friendly credentials. 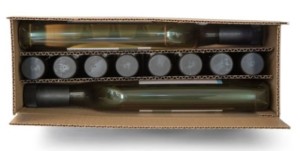 But perhaps these square bottles have a real future, especially at a time when online ordering and home delivery are on the rise (a trend that, internationally if not here, lockdown is only accelerating). Remarkably, such is the clever design of these bottles that ten of them can be packed into the space normally occupied by four standard glass bottles (eight in a row, with two filling the spaces alongside the serried necks). That’s a big saving in space as well as weight.

Unfortunately, the absurdly overpackaged heavy glass bottles – unnecessarily bulky and unfriendly to just about everything except grandeur of appearance – will keep their presence at the top end of the market, and no doubt glass will continue to play a role in premium wines. In the local market, more wine is still sold in glass (various formats) than in bag-in-box, though if you add in plastic, foil bags and tetrapacks, glass retreats. The flat PET bottle might well accelerate the change. Arguably, especially from an environmental perspective, that’s all to the good.