Some wineries go through troubled times, with much chopping and changing, before they settle down with an established wine aesthetic and – often it seems to be the vital element – an established management and ownership. Delaire in Stellenbosch was a prime example – it’s almost hard to realise now, nearly two decades since Laurence Graff bought it and transformed it into the plush, substantial and settled venture it has become, that he was the fourth owner of the property since its founders, John and Erica Platter, sold it in 1988. Morné Vrey took over winemaking in 2009 – the ninth to do so. Turbulence all now forgotten.

Lammershoek’s minor turbulence this century has been less dramatic in terms of ownership since the farm, then mostly supplying the local co-op, was bought by Paul and Anna Kretzel in the late 1990s, with German partners. But the turnover in winemakers tells some of the story. We can ignore the first two who disappeared quickly, before Albert Ahrens took over in mid 2002. This was, of course, the time when young Eben Sadie was starting to revolutionise Cape wine in a small rented shed on Lammershoek. Albert’s wines were good but essentially conservative (quite big and ripe, using plenty of new oak as the target market required), and Lammershoek was not fully involved in the developing Swartland revolution – though the wines were starting to move in that direction, and ever improving.

Then – wham! – Albert was out and in 2010 Craig Hawkins came in to inaugurate something of his own “natural wine” revolution – in both vineyards and cellar. Shifts in the German ownership started happening. As for Craig’s winemaking – I remarked once before that “Some of his wines worked well, let’s say, but some didn’t – and in various ways it was for the good of everyone when he and the part-owning Kretzels left, to concentrate on Craig’s Testalonga range.” The Lammershoek vineyards were also in a difficult (read: weed-ridden) space, shall we say, following their sudden transition to full- blown organic farming – though there had long been a more gentle movement in that direction.

In time for the 2015 harvest, in came new winemaker and MD Schalk Opperman and viticulturist Charl van Reenen, as a promising team. The wine ranges were changed – to be frank, some of the labels had been compromised by vinous unreliability, retailers and importers were unhappy. 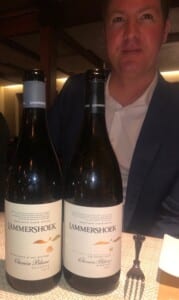 Move forward to now and there have been some more changes, less momentous, but I think probably fundamentally important, confirming a new and mature stability for Lammershoek – which has, after all, some splendid vineyards and a history of some excellent wines on which to build. I tasted two of those older wines at a small dinner recently at Cape Town’s Aubergine restaurant, where the stars were actually the latest releases of Lammershoek’s top range (as reviewed by Christian Eedes last week). The Chenin Blanc Barrique 2007 was noted in Platter’s on release as still evidencing new oak, but last week it was all harmonious and lovely, though certainly with some toffeeish notes of development. Much better in fact than some grander Swartland whites of that age. Syrah 2007 had had 50% new oak, but is also drinking extremely well – with firm tannins serving the fruit well, and remarkably fresh. I daresay these two wines would not perform as well on auction as some fancier names – though they are both as impressive examples of Swartland  ageability as I know, as well as reminding us (and fashionable winemakers) that ripeness and intelligent new oaking undoubtedly have their place in wines that are intended for development in bottle.

I got sidetracked there. Those recent changes I referred to: Arguably the most significant is that owners Andreas and Sonja Abold have relocated to South Africa and assumed a really hands-on role on the farm (though based in Cape Town with their schoolgoing children, they spent much of hard lockdown on Lammershoek), performing the management role that Schalk Opperman did – he has moved to Quoin Rock in Stellenbosch. Winemaker Jorrie du Plessis officially becomes cellarmaster. Marius Kotze has been in charge of the vineyards (many of them old) since 2018, easing them back to full vigour, while maintaining an organic focus, I gather. Worth noting is that the farm now carries some cattle and sheep too – and vegetable gardens for the farmworkers, whose housing has also, I believe, been renovated and improved, under Andreas’s guidance. Chatting with him at dinner, I was genuinely impressed by his obvious love for Lammershoek and his determination to make it a happy, successful wine estate. I suspect a lot of money has been spent in the last few years.

It looks likely there will be some trimming and focusing of the range. Branding has already shifted – hopefully for the last time for a while! The “Terravinum” name has been dropped for the Reserve range (Chenin Blanc, Blanc, Syrah and Rouge), with “Renaissance of our Heritage” also appearing as the range name. The label has been redesigned as from the 2018 vintage – but old admirers of Lammershoek will notice that it is essentially a reversion to the original, with a few tweaks.

It was the launch of these four wines that the Aubergine dinner (with Harald Bresselschmidt’s admirable food pairings) was celebrating. I won’t compete with Christian’s notes – though I’d be a touch more generous with scoring, especially for the Chenin Blanc (off a 1968 block). It’s a beautifully delicate, elegant wine, with a bright freshness eloquent of Lammershoek’s granitic soils, and a subtle core of lovely sweet peach. The Blanc blend, while also refined, is rather richer in style (unlike Christian I wouldn’t call the Chenin at all “full and creamy”), though still with the moderate 13% alcohol. Jorrie has a pleasingly light touch with his winemaking, though the Syrah, with appealing typically Swartland notes of lavender and other herbs  is just a little ripe and sweet for my own taste.

I see from the Lammershoek website that the wines are being offered with an introductory discount to their already reasonable prices (R280­–R320 per bottle, the varietal ones being the higher priced), making them even more recommendable. Also well worth exploring are the Mysteries range (we drank the gorgeously perfumed, lightly succulent Pinotage 2018 and Tinta Barocca 2016 at Aubergine) and the excellent value Innocents.

A substantial estate like Lammershoek, with an orientation to the institutionalised revolution (if that’s an acceptable formulation) is an important component in the dynamic Swartland, helping to complement the numerous small producers. With excellent wines, all it needs now is the stability that seems to have arrived.