Tim James: Sadie tales of the drought, and new releases 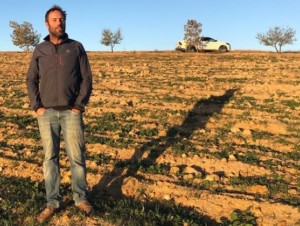 One must feel a little sorry for Paul Jordaan, winemaker alongside Eben Sadie at Sadie Family Wines.  Certainly, Eben feels sympathy for the fact that Paul took over prime responsibility for the cellar with the 2016 vintage – the first of the drought years; he has yet to have a normal, let alone easy, let alone truly excellent vintage to work with. Of course, Eben doesn’t confine himself entirely to his beloved vineyards, especially at harvest time, so it must be a joint effort – and presumably, Eben is best equipped to make the crucial decision of when best to pick. And that’s possibly an even more crucial decision in times of drought when there’s such a difficult play-off between freshness and vinous substance.

The third of Paul’s vintage releases – 2017 for Columella and Palladius, 2018 for the Old Vineyard Series – will be happening only later in July, but last week I had a preview tasting on the Paardeberg, along with some local restaurateurs and retailers. It was Eben who presented the wines (he hasn’t given up his eloquent showmanship!), and he started off by saying unequivocally that “everything now relates to the drought”. Much has had to be adapted, in both viticultural and winemaking decisions. As to that crucial decision about picking, in 2018, “we picked earlier to an extent”. Even so, the wines have on average 0.8 grams per litre less natural acidity (and there’s effectively no acidification in the Sadie cellar, though a little was experimented with), and the average pH is up. But, Eben said, there’s only so far you can go in this direction without sacrificing too much (he has no hipster love of ultra-light, highly acidic wines). The ideal Swartland alcohol level for him is 13-14%.

Further on the drought, he said soberly that some vines had been lost – “and if the drought continues we will lose more”. Particularly hard hit has been the ‘T Voetpad vineyard in the far north of the Swartland: this wonderful mixed vineyard, with mostly century-old vines (red and white semillon, palominon, chenin, a little muscat) that, sweating in extreme heat, has produced some great wines since the maiden Voetpad in 2009. A little wine came off the vineyard in 2018 (you’ll have to scrabble to find it, and a few others). In 2019 – none at all. A process of rebuilding the vineyard is underway – it will be an expensive undertaking, and Eben warned that Voetpad will never again be quite the bargain-priced wine it has been.

Incidentally, talking of reduced volumes, he says that in the drought harvests 2016-2019 they have effectively “lost an entire year’s production”. Less to go around for winelovers, and a financial blow for the company. But it’s worth extrapolating beyond the comparatively well-off Sadie Family Wines, to less successful producers, and to the farmers of dryland vineyards and their employees, to be reminded of the most significant effects, in human terms, of the effects of the drought in dryland areas.

Meanwhile … what can a good farmer do while bewailing the present but build the future? Eben has appointed a farm manager (Morné Steyn) to help him and consultant Jaco Engelbrecht with vineyard work. And they’re planting vines – both on the small home farm on the Perdeberg, Rotsvas,  and in partnership with other landholders. The future means, inter alia, taking the present (the threat of climate change for the worse) into account,  so that grenache blanc (“very resistant to drought”) is being planted on the Skurfberg mountains along with red/white semillon and chenin. Larger plantings are also happening on the chalk soils of Dwarskersbos near the sea up the West Coast (where the Skerpioen vineyard is). And a multi-varietal white vineyard will be planted this year, after extensive preparation, on Rotsvas itself. Incidentally, yet another spin-off of the drought is a shortage of planting material from the nurseries.

But what about the new wines? In fact the team has done remarkably well with what was clearly a very difficult couple of vintages, and the wines are on the whole excellent – some perhaps for the shorter rather than longer term. Columella and Palladius were less affected, coming as they do from a number of widespread vineyards, allowing for selection. But the single-vineyard Ou Wingerdreeks wines are also impressive. I’ll report in a little more detail on the wines next week. Be notified in advance, though – you needn’t hesitate to make plans to seek them out, come the end of the month, and give them welcome.