I confess I’m feeling a touch weary of thinking about lists of South Africa’s best wineries (and not because of the few trolls who slithered out of the slime to pass their comments too). However, one interesting matter remains to report on. Having asked the panel of voters for their Top 20, I also asked them to nominate “up to five NEWISH wineries – those with just two or three vintages released and therefore perhaps still at the candidate level for the Top 20”. Compiling such a list is not an entirely easy task – first, one has to remember all the newish wineries (or those one knows of) and bring them to mind before weighing their virtues. You might doubt that as a problem, but I bet if you looked at the names of the 46 wineries that did get a mention you might have to admit to having your memory beneficially jogged.

You might also well point out that quite a few of them have been around quite a while….

Voters weren’t asked to rank the wines, and it then was simply a matter of counting the number of votes cast. 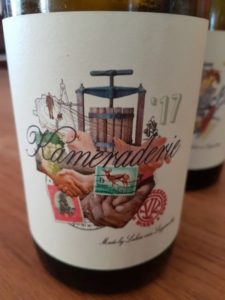 There was a clear winner: Van Loggerenberg Wines, voted for by just over half the panel members. Lukas van Loggerenberg rather burst onto the Cape wine scene with his 2016s: Breton, a cab franc that redefined the possibilities for this much-vaunted variety in South Africa, being made in a Loire-inspired lighter and more refreshing, un-oaky style than we are used to here, where the Bordeaux model rules (I think we’re already seeing the influence of that wine in some others – a rare example of a newcomer influencing some established players). Also a fine cinsaut, in a more serious style than many, and a blanc de noir from the same variety, one of a tiny handful of truly excellent, serious local rosés that could compete with top examples from Provence. And, of course, an excellent chenin (there’s now a second). Altogether, an exciting and confident combination of innovation and tradition.

In joint second place (with seven votes apiece) were two Franschhoek-based wineries: Leeu-Passant, the joint project of the redoubtable Andrea and Chris Mullineux with their partners in Mullineux and Leeu Family Wines. Leeu-Passant has settled down now to two wines: a marvellously precise chardonnay from Stellenbosch and a Dry Red including cinsaut from the oldest black-grape vineyards in the country blended with the two cabs. And Le Lude, the brilliant sparkling wine specialist which has admittedly been around a few years, but certainly qualifies as “newish”, given that the bubbly-passionate Paul Gerber only late last year released his first vintage wines.

And then another joint pair, with six votes each: Hogan Wines, with Jocelyn Hogan-Wilson’s Chenin Blanc and Divergent – the latter being one of the first really serious modern blends with cinsaut (along with that Leeu-Passant), cabernet and carignan being the other partners). The other winery in the Top Five newcomers is Lourens Family Wines, which made a stunning public showing in Cape Town earlier this year when Franco Lourens’s expanded range was shown alongside the Alheit new releases in a splendid bit of generosity by the Alheits – Franco assists in their cellar (Christian on this website rather cheekily asked: “When does the apprentice become the master?”).

It occurs to me, incidentally, that four out of these five new and rising stars have red wines including cinsaut. A sign of the times. A more important one is that such is the productive, creative energy of South African wine these days (I can’t see any real signs of the revolution petering out yet) that there were many other plausible names put forward. And a couple which are no doubt also plausible but new to me, I confess. It’s hard work keeping up.

Having a rather chaotically organised cellar – not to mention it being dispersed over three places, two of them only seldom examined – is of mixed benefit. Perhaps it’s surprising...