Tim James: Some conclusions on completing tasting for Platter’s 2016

Soon, I hope, I shall soon return to my customary semi-idleness, with time to go to the occasional wine function or, more interestingly, to visit wine farms (a couple of those already lined up), even to write blogs more frequently. What’s more, I shall be able to choose what to drink with my dinner, and it won’t be raw, young Cape wines, I can promise. During the few Platter-tasting months I am either sick of wine by the time dinner comes or feel obliged to try with food one or two of the wines I’ve been sampling.

But I mustn’t be too airily dismissive of raw young Cape wines: this last week, for example, I had four shiveringly lovely Alheit wines open (as well as some Leeuwenkuil bottles when red was called for –just wait for the 2013, Roland Peens, if you thought the 2012 Heritage Shiraz was good…). It was no real hardship to keep on re-trying Magnetic North Mountain Makstok and Radio Lazarus and marvelling at what different Cape terroirs and magic winemaking hands can do with chenin blanc. 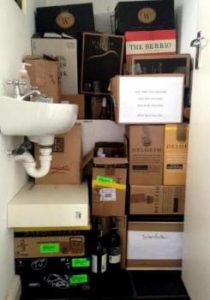 On the whole, however, I’ll be pleased when, sometime this week, I open my last bottle of Platter wine. A dozen brandies await, but the change of pace and reduced pressure will make that downhill work. The photo alongside, incidentally, shows the pile of second bottles – you will gather that there haven’t been many corked wines; there’s a lavatory buried under there somewhere.

And, of course, the five-star tasting awaits at the end of the month, a more massive event this year, conducted over two days, as we’ll also be blind-tasting all the wines rated four-and-a-half stars. Something of a schizophrenic thing, of course, for a sighted-tasting process to culminate in something like this. It’ll be a slowish event, though, with groups of three tasters having comparatively light loads, and discussing each wine – trying to avoid the problems associated with the big competitions (just as the event itself tries to insure against – at the top level at least – problems associated with sighted tastings).

The tasting experience of the past few months has not really been extensive or intensive enough to warrant confident conclusions but, taking it in conjunction with other recent observations, I have some tentative thoughts. Like the following:

Sauvignon blanc didn’t fare well, on the whole in 2014, certainly in Stellenbosch, though there are of course fine exceptions to the tendency to a lack of fruit intensity. The same (including exceptions!) is true also of some other whites. Few serious 2014 reds coming through yet, but I’ve seen the same weakness at a lower level there. So I’d suggest treading warily – especially with 2015 coming up. Fewer of this year’s wines tasted, of course, but they suggest that all the hype about the vintage has real substance to it.

On a more positive note, the fuss (in rarefied circles at least) about cinsaut is well justified, I’d say, going by what I’ve tried of new releases. There are clearly two broad styles emerging (even before forthcoming blends start to reveal further truths) – the earlier-picked, bright and light ones, on the one hand, and a richer, riper style on the other – often with a bit of newer oak too.

And syrah gets better and better, it seems to me: at all levels and wide-ranging (as far south as Elim), but especially at the most ambitious end. It was presaged by Mullineux, this move; now the best local syrahs are stunning. Undoubtedly the Cape’s best red-wine category. But there is also something of a pinot revolution – more and more of the stuff, aiming at terroir expression.

A final modest observation. I wrote a little while back about the new wineries and labels that I sampled, and must repeat here that the Cape wine revolution is proceeding apace, and marvellously.