Tim James: Some thoughts on I Taste Red: The Science of Tasting Wine 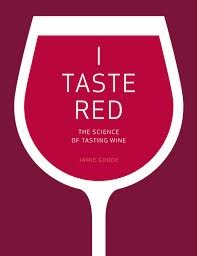 I Taste Red: The Science of Tasting Wine

To adapt Voltaire: if Jamie Goode didn’t exist, wine nerds would need to invent him. No other wine writer appears to have the scientific background, or the will, or the skill, to bring rigorous scrutiny to this sadly vague field of endeavour (wine appreciation), which even at its most professional doesn’t really know whether it’s a matter of aesthetics, science, gentlemanly appreciation, amateur enthusiasm or straightforward business. And while I’m still in the mood for wholehearted congratulation, three cheers for the publisher of Jamie’s latest book, I Taste Red: The Science of Tasting Wine, and of most significant books on wine these days – University of California Press.

Incidentally, having mentioned the publisher it is perhaps worth noting that, unlike most reviewers, I am not commenting on a “review copy” but on one that I purchased myself out of interest (the book is available from loot.co.za at the good price of R401).

I intend to engage, over a few blogs, with a few of the issues the book raises, rather than attempt a straightforward review (those that I’ve seen have been entirely laudatory). Let me state immediately, though, that I would unhesitatingly recommend it as vital to anyone who ventures – or appreciates –critical/judgemental opinions on wine and wishes to do so as honestly and informedly as possible. I have a few doubts as to whether the book provides a totally convincing way forward, but it will help honest tasters to arrive at some guidelines for themselves.

The scope of I Taste Red is alarmingly wide and Jamie has done a great deal of research. Tasting wine is the focus, but as that activity is part of human perception, investigating it requires “dipping into the worlds of physiology, psychology, neuroscience, and philosophy”. Chemistry too, of course – but that’s a more “at home” subject for the author.

The essential implication of this work is, I think, to confirm that anyone who blithely claims that a wine critic must relate only to “what is in the bottle” (the basic argument for blind tasting, for example) is invoking the impossible. Our wine experiences are coloured by our culture in general and our wine-education in particular, by our individual physiologies and psychologies, by immediate context; the book adduces the evidence for all this, and explains it well. As Jamie asserts, humans “are not simple measuring devices”. He stresses, invoking both physiology and neuroscience, the individual re-creation of seemingly “objective” realities such as flavour, but also acknowledges the social dimension (such matters as differences in taste between cultures and historical periods) – pointing to the need to historicise ourselves and our activities.

Incidentally, the book does deal intelligently with some of the problems and some of the research findings rather despairingly cited by Marthélize Tredoux on this website last week – describing them well and putting them in a different, more serious context from that in which the general press likes to maliciously delight in: finding something that seems to undermine the obscure and snobbish matter of appreciating fine wine.

Jamie certainly doesn’t think that the project of wine expertise, of educated palates, of useful wine tasting and wine description, is revealed as nonsense by the revelations of physiology, psychology and neuroscience – though he does think some reform in wine-tasting practice is necessary. In fact he’s a reformist rather than a revolutionary and, in a few instances perhaps over-influenced in his conclusions by his own imbrication in current systems of professional wine judging.

Take, for example, the common situation of big (blind) competitive tastings. Quite apart from the general significant problem of individual differences in taste, Jamie discusses the problem of desensitisation, in which one gets used to a particular aroma. More hazardous is cross-adaptation. A repeated wine aroma (of, say, cabernet in a big line-up of that wine) “will change your perception of the wine without your being aware of it. Tasting a lengthy flight (or series) of the same kind of wine can be risky in this regard”. Normally, he points out, “repeated exposure to the same taste or smell will result in a degree of adaptation”. When it comes to astringent tannins and saliva flow, the problem of a big line-up of reds is more dire: “the sense of astringency increases with each fresh sample. The overwhelming of “the buffering and dilution capacity of the saliva” can also “lead to acidity being misjudged”.

But his is not a “counsel of despair for professional wine tasting” and he suggests some ameliorative practices rather than accusing the whole big-tasting business of being unuseful nonsense, as some of us might like to. Let’s all agree, though that the findings of science “should encourage us to approach tasting with a degree of humility”. That would be a great development.