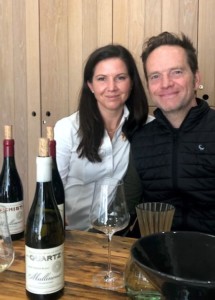 Which of two contradictory things is harder to believe: (1) That Chris and Andrea Mullineux’s Syrah and White Blend are now already into their second decade of releases? (The first vintage, as well as of the extraordinary Straw Wine, was 2008 and they’re soon to release the tenth, 2017, Syrah, while the 2018 Old Vines White is already available.) Or (2) that the pair have only been around for little more than a decade as own-name producers? It’s a short time in which to have so emphatically placed themselves in the topmost elite of Cape winemaking – not to mention occupying a splendid Kasteelberg farm (see my enthusiasm over their new vineyard) – but things do happen quickly in a revolution: reputations are rapidly made – and a few are lost.

Andrea and Chris generously gave me a preview tasting last week of the forthcoming new releases of their single terroir wines (2018 Chenins, 2017 Syrahs), as I can’t attend the official launch. Coming away from the tasting, I felt smug pleasure in not feeling obliged to wrestle with scores. It would seem to me rather absurd to discriminate with a point added here or reduced there when the whole lot are excellent, and personal preference on the (as-yet-early) day makes perhaps the significant difference – though I accept that some people manage to believe in absolutes about quality and aesthetics.

Moreover, probably especially for the syrahs, the less wealthy winelover need have no anguish about sticking to the much less pricey blends – though if that category includes geeks there might be groans about not being able to linger over the small-volume, single-terroir wines. The blends are, after all, the Mullineux flagships – I noticed a few years back a well-known international critic referring to them as the “entry-level” Mullineux wines, which is emphatically wrong.

While the single-terroir wines are often fascinating (and are made with an extra year in oak, intended for longer bottle maturation), it should be remembered that at this level blends are made in order to achieve a whole that is greater, often more complex and better balanced, than the sum of its parts – and also often readier to drink, precisely because of the harmony of the blend. In parentheses, it’s also worth noting that the single-terroir wines come from the vineyards which can cope best on their own – it was something of a revelation when Porseleinberg and Mullineux started releasing unblended syrahs, as it had always been a mantra of guru Eben Sadie that Swartland reds especially needed to be blended (varieties and terroirs) in order to achieve high quality.

In fact, one of the great pleasures of my leisurely tasting was to return constantly to the Syrah blend after tasting the others, to find in the blend what I’d been noticing in the single-terroir wines.

If yields were down in these years of drought, there was often a concomitant concentration, and many dryland vineyards performed better in 2017 and 2018 than in 2016 (perhaps because of more careful and appropriate vineyard management). The 2017 Granite Syrah is typically bright and fresh, assertively perfumed (floral & spicy), sleekly muscular, with balanced acid and tannin accentuating each other. Schist Syrah Roundstone is always less immediately expressive in youth, but you sense great volumes lurking there. The tannic structure is broader and richer and simply bigger than the Granite version, the musculature more chunky. The Iron Syrah (particularly small volumes in the drought years because of the soil structure) is always the showiest of the three: rich, meaty, chocolatey aromas, the palate denser, the fruit obviously intense. So it is in 2017, though I enjoyed this wine more than I usually do – perhaps because it seemed more drily tannic, with a sterner affect than usual.

And the Mullineux Syrah blend? Yes, it had aspects of all three: lightly aromatic, with some ripe meaty notes; more approachable than the others, succulent & sweet-fruited, though with a refined, beautifully integrated structure and a firmly dry finish. I admired it even more than other recent vintages, I think.

As for the whites – well, of course one can’t compare the Old Vines White 2018 to the single-terroir chenins in the same way as with the reds, as the lightly aromatic, floral-spicy White, though predominantly chenin, also includes significant contributions from clairette, grenache blanc, viognier and semillon. Chenin’s dried apricot/peach is obvious (no doubt viognier contributes to that element too), and there’s a floral zing to its freshness and lightness, and also a deeply pleasing stoney quality. A very good wine.

Volumes for the chenins were way down in 2018. (There’s another advantage of blends, of course, as Eben Sadie also noted when looking at his drought-thinned Old Vine Series – one can always look around and find other grapes to help fill the hole.)  Mullineux Granite Chenin Blanc comes off two Paardeberg vineyards. Again it’s notably bright, with a lemony acidity, and a green element that is not unripeness at all – more a yellow-green, like a greengage. There’s real concentration and density in the wine, giving an austerity and intensity that wants at least a few years in the bottle to start mellowing.  Quartz Leliefontein (from the other great Swartland mountain, Kasteelberg) came as something of a relief: fine, but less tense; broader, more outgoing, the core of sweet fruit (more yellow, peachy) more obvious in youth. Yet its charm also has a vital finesse.