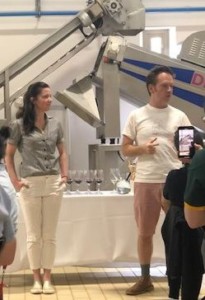 Andrea and Chris Mullineux have been greatly significant in the reputation of the Swartland for producing first-class syrah. Chris had been making a Swartland Syrah for Tulbagh Mountain Vineyards (now Fable) since 2004, and it remained that winery’s best wine until he (by then with Andrea as assistant winemaker, not to mention wife) left in 2007 to establish an own label – understandably based in the Swartland. It was inevitable that syrah would be integral to Mullineux Family Wines from the start, along with a white blend and a straw wine. (It was to be joined, of course, in 2010 by the first two of their single-soil syrahs – alongside Porseleinberg establishing an important new point: that an essentially unblended Swartland syrah was not only viable but could soar high in terms of quality.)

They moved to a modest house in Riebeek-Kasteel and earned a living in those early years primarily by travelling to Stellenbosch to make wine for Reyneke – which is where their own two first vintages were made. After that, they established their own winery in Riebeek town, itself an important move in the history of the modern Swartland, as the new-wave focus till then had been almost solely on the Paardeberg. 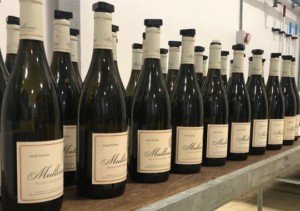 I remember that maiden Mullineux Syrah 2008 (I still have a bottle of it) being released much earlier than would have been ideal – because Chris and Andrea needed the money to pay for the bottling of the next vintage. Things are somewhat more financially easy these days: last week they held a vertical tasting of the first ten vintages of Mullineux Syrah (including the release of the 2017, after a leisurely 30-odd months maturation) in the newish cellar of the beautiful Roundstone farm on the slopes of the Riebeekberg, owned by their Mullineux & Leeu Family Wines partnership.

The Syrah has always been a blend of grapes off different soils: granite, schist and iron, the proportions varying in response to vintage conditions – the easier 2010 and 2015 vintages the only ones where their contribution was equal. Modest oaking (the barrels getting larger over the years); always at least some whole-bunch fermentation (100% for the first time in the 2013 – more perfumed and fresh than its predecessors at this vertical tasting); always basically naturally made. Improvements in farming, thanks to the work of Rosa Kruger since 2012, and Chris now being able – Andrea ruling the cellar – to spend more time in the vineyards of the farmers they work with in sourcing most of their grapes (from up to seven vineyards, with the four core ones they’ve always used).

The style of Mullineux has been fairly consistent, aiming at a degree of ripe, rich luxuriance as well as intensity, but with those firm but fine, melting Swartland tannins a vital presence, alongside the fresh brightness given above all by the granite component of their wines. Yet I did sense some significant variation in the balance of these components over the years – it’s perhaps still too early to ascribe a fixed aesthetic that’s independent of vintage. Generally, for example, I notice a smoothening, a greater plushness and refined softness of texture coming in with 2014 (a charming, ingratiating wine, but perhaps my least favourite of the line-up). And yet 2016, the first of the stressful “drought years” is one of the freshest and most elegant of them all, though still very youthful, with more of the fine-grained tannin that characterises all these wines to some degree. Along with 2013, another of my favourite vintages, it has an alcohol level close to 13%, the lowest of the ten wines.

The maiden 2008 is still drinking very well, with lingering fruit but all the components already harmonised by development in bottle. There’s a touch of sweetness especially on these early wines (the first three vintages), partly thanks to the alcohol, I suppose (the 2008 declares 14.5%, the next two 14%, after which 13.5% is commonest); but I also notice that the residual sugar level throughout remains resolutely above two grams per litre. The first three vintages I’d say are certainly ready for drinking (but there’s certainly no hurry to do so); it was only from 2011 onwards that I felt confident that the wines would gain by further maturation.

Along with the especially elegant 2013 and 2016, another favourite vintage of mine was the 2012: pervasive, chalky tannins, a particularly fine intensity, and in effect a drier finish. The wine from the famous 2015 vintage, incidentally, was very pleasing, almost too easy-going in its approachable charm – but perhaps there are hidden depths that will become more obvious in time.

And the newly released 2017? I had tasted it first in August, alongside the three single-terroir 2017s, and noted then that it showed aspects of all three: “lightly aromatic, with some ripe meaty notes; more approachable than the others, succulent and sweet-fruited, though with a refined, beautifully integrated structure and a firmly dry finish. I admired it even more than other recent vintages, I think.” I felt the admiration again this time but was reminded that I enjoyed the comparatively and anomalously light 2016 more. Interestingly, the undoubtedly ripe, hot-vintage 2017 is the first since 2008 to declare 14.5% alcohol, but that didn’t disturb me, so deft is the balance. Mullineux Syrah is not the most characterful of modern Cape syrahs, but it is certainly in the top league and, at about R350 (I suppose) not excessively priced, as things go these days.