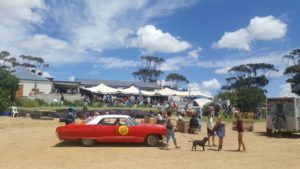 The Elim Wine Festival is lively, noisy and cheerfully crowded, with plenty of good wine (and beer) available – mostly for downing rather than judiciously tasting. So I discovered last Saturday when I trekked down through the Overberg wheatlands to Black Oystercatcher winery, where the festival was held this year.

Not the sort of occasion, then, where one (or at least I) would effetely wander around with a notebook, swirling, sniffing and spitting. Swigging, more like it. But, with two dozen other earnest-ish winelovers, I did attend the few formal tutored tastings on offer, with interest and satisfaction.

It’s 20 years since the first modern vine plantings here, near the southernmost tip of Africa. Elim was established by Moravian missionaries in 1824, and became a refuge for many of those suffering at the hands of the white settlers – mostly notably destitute freed slaves in the 1830s: the village has what is, rather shamefully, the country’s only monument to the slavery on which the wine industry and much else was founded. The missionaries wanted wine for liturgical purposes, so pioneered viticulture here, but at some stage that stopped. It was only when the “quota system” of the all-powerful KWV was abandoned in 1992 that the adventurous could experiment with growing grapes in the cool, windy conditions of what became the Cape Agulhas district and the Elim ward.

Much was expected of cool-climate Elim, and we can legitimately ask after two decades: has it delivered? Yes, no and maybe, I’d say. White wines undoubtedly, if not spectacularly. There’s a bunch of good to excellent sauvignon blancs, some of them lightly oaked (like Giant Periwinkle Blanc Fumé 2015 and Strandveld Wild Ferment 2015, the two I most admired on Saturday), but mostly unoaked (including Ghost Corner, Black Oystercatcher with a lively, flavourful but now slightly tinned-pea-ish 2007, and Lomond). Attractive blackcurrant and fynbos notes abound, as well as a definite earthiness, and a fine acid structure. A couple are ripely rich, like the oaked  Black Oystercatcher Wild Ferment 2015, with a warm alcoholic finish.

Perhaps more impressive on the whole, being generally more complex, are the sauvignon-semillon blends. Showing their ageing potential amongst more youthful examples, a Strandveld Adamastor 2009 was excellent, just hinting at the asparagus pungency that for me can intrude too much on developed sauvignon.

Sijnn, from Malgas, outside Agulhas, introduced chenin blanc to the tasting with their balanced, richly textured blend (Conrad Vlok of Strandveld also has plans to plant chenin). But it was to the selection of shiraz and shiraz-based blends that Sijnn made the greatest contribution, with the Syrah 2013 and the Red 2010 putting the Elim examples into perspective (the fine Sijnn Red 2010 is developing beautifully – amazingly, it’s only now disappearing as the current release; I happily bought a bottle at the Festival’s pop-up shop.)

For it’s with reds that Elim hasn’t fully met hopes. The shirazes and blends are mostly too ripe, warm and sweet-finishing. They’re not bad at all, and oaking is generally restrained – but what’s the point of a cool climate if you’re going to offer this sort of structure and balance? With so much ripeness, terroir has little chance of poking its head into the frame.

There is one Elim shiraz, however, that shows the potential of the area’s red grapes in the right hands. It comes from Trizanne Signature Wines, the own-label of negociant Trizanne Barnard – unfortunately not represented at the Festival. With her 2014 Reserve Syrah Trizanne produced something both excellent and distinctively cool-climate, with some finesse to the spicy, floral-herbal notes. That’s the current release and it’s worth seeking out (around R220), but if you’re interested in the best Cape syrahs, especially don’t miss the 2015 when it’s released – it’s even better.

Apart from Sijnn, another non-Elim “visitor” to the Festival also pointed to the problem of most Elim reds: the fascinating, multi-variety Moveable Feast 2013 from Bruce Jack’s Napier-based The Drift. Made with all the simplicity of mastery – and picked while the grapes can still produce a wine of genuine character, as well as of fresh elegance.