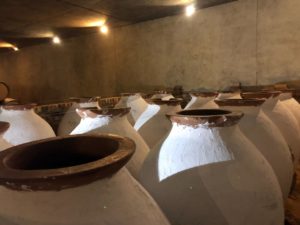 It is astounding the possible difference made to wine by the nature of the vessel in which it ferments and undergoes its maturation before bottling. This is becoming increasingly obvious as more and more serious wines are being made or put into something other than stainless steel tanks and wooden barrels (or ugly plastic). Large concrete tanks have also long been around, but now there are, amongst others, egg-shaped concrete and polymer vessels, traditional larger wooden foudres of course, and various forms and sizes of clay pots – of even greater antiquity than wood.

I have been a little besotted with the effect of maturation in clay pots (usually called amphoras – or amphorae if you prefer Greek to English plurals) ever since I became aware of their emergence into avant-garde South African wine. First, there were a few to be sampled before they were blended with other, more conventionally made components; then there were a few finished wines made entirely in amphora. The first of these to be released, to my knowledge, was a tiny bottling of Ashbourne Amphorae 2013 (which I never tasted, and I don’t think it’s been repeated).

Then came Grand Provence’s Amphora 2015 and then Charla Haasbroek’s Tapestry 2016 – the first from Chenin with some Viognier, the latter entirely from Chenin. At the time I wrote about them sharing “an extraordinary fine-grained purity, delicacy and elegance – also a definite earthy quality, though not at the expense of fruit purity”; and most admired  in the Grande Provence “the way an element of stony austerity meshes with some weighty richness and soft texture, all dependant on a penetrating, perfectly balanced acidity”. Then came the excellent Reyneke Natural Chenin Blanc 2016 from clay, followed by the even more astounding 2017 (though the Platter taster seemed entirely to “miss” this wine).

Now, sharing those essential characters of texture and purity, come the first Cape qvevri wines, from Avondale. I wrote late last year about tasting the first experimental wines made by Corné Marais in the 24 qvevri he’d travelled to Georgia to acquire for Avondale, to supplement the amphoras they already had. The essential difference between a qvevri and a typical amphora, apart from the tapering lemon shape, is that these Georgian vessels (used for very many centuries in traditional winemaking) are permanently buried up to their mouths in earth – apparently “buried in the earth” is what the name means. As are those at Avondale – you can read more about the “journey of the qvevri” on their website.

Back then at Avondale I tasted very different qvevri chenin components, which have now been assembled into the final, bottled wine, as follows: 40% came from juice from wholebunch-pressed grapes fermented and aged on their primary lees; 30% wholebunch, aged on skin and stems for four months, pressed and returned to their lees; 30% destemmed grapes aged on their skins for three months, pressed and returned to age on their lees. They were all taken out of the qvevri in February 2019 (just in time for the next load!), blended and bottled.

The final mid-gold wine is lovely and elegant, with richness, silky texture, a full, firm acidity and a remarkably subtle tannin element; a stony, pebbly freshness persists. There’s a little pineapple fruitiness, characteristic of Avondale Chenin, but immediate fruit is not what the wine is about – though somehow I want to insist on purity of fruit.

The Qvevri red wine is from 50% Grenache, 35% Syrah, 15% mourvèdre, each treated separately. Only the Grenache was destemmed, and left on its skins for a month; the other two spent three months on skins and stems. Blending and bottling was also in February. What distinguishes it from other ripe but light, red-fruited, flavourful, wholebunch-dominated reds is, I think, that great purity of fruit, the softness of texture, and the subtlety and finesse of the tannins.

Last December Avondale owner/GM/passionate viticulturist Jonathan Grieve was unsure if there’d be any all-qvevri wine released. The main point was to build the selection of components for the estate’s existing wines. I’m pleased he did decide to offer these.  Will there be further vintages? Now that’s what he says is uncertain. Avondale has staked its claim to be the first in the Cape with qvevri wines (it’ll be a long time, I suspect, before there’ll be others). I dare say future vintages will partly depend on the reception given these. I hope my enthusiasm will count for something.

Quantites are small but not minuscule for the 2018s: 2700 bottles of the Qvevri Chenin Blanc, 3000 of the Qvevri Grenache, Syrah & Mourvèdre. They’re available from the estate for R250 – a remarkably reasonable price for wines that are so good as well as being modestly historic.