Tim James: The impact of the drought

Few of us in the Western Cape fully realise as yet, I suspect, the impact the drought will have. Little by little I’m discovering more, partly though the perspective of wine. Amidst a larger agricultural crisis which will cost many thousands of jobs and create great suffering and anguish, vineyards accustomed to copious irrigation are already dying, I’m told, up the West Coast (around Vredendal for example), as farmers are forced to decide which to save with the little precious water they have, and which to doom. Meanwhile, paradoxically perhaps, comparatively good spring and early summer rains in some areas – including dryland Swartland – are raising hopes for a fine 2018 harvest, especially given the unprecedented coolness of the season up to now. 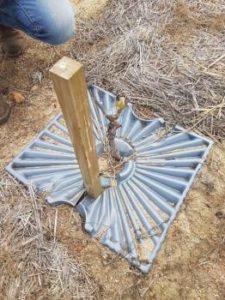 A mat to facilitate moisture collection employed in the vineyards of Eben Sadie.

Vineyards are not the only demanders of water in the industry. Wineries need a great deal too, primarily for washing purposes, especially during the peak of harvest season – and it must be of potable quality. A small winery like Eben Sadie’s will need around 5 000 litres per day; a medium-sized one like Meerlust about 15 000 (more than my little household now uses in well over six months). And both of those I believe to be careful users.

At the end of the dishearteningly dry winter, Swartland Municipality hand-delivered warnings to all wineries of the maximum volume of water they will be allowed: 20 000 litres per month. Less than four days’ worth for Eben Sadie at peak time. He is not only drilling for water on his small Paardeberg property, but also arranging to have tankerloads of water delivered from afar.

Like Cape Town householders who are now aghast (speaking for myself at least!) at how profligately we’ve used water in the past, farmers and food processors are learning to waste less. Just think, Eben pointed out to me in what was a lengthy and thoughtful lecture of a phone-call, how much water is used for washing the carrots and potatoes we buy at the supermarket – let alone the vast volumes it takes to produce a kilo of beef; the wine industry is comparatively modest in its water use. Eben points out the positive side of the drought: “It is teaching us how to treat water resources properly”.

Many farms and wineries have serious boreholes, of course, and will have water to meet their needs. Others have alternative natural supplies. Cape Point Vineyards announced recently that: “By harnessing mountain water … the farm is now completely off grid from Municipal Water.” They add:  “Water collected on our property is passed through an intricate filtration system, and is tested on a monthly basis to ensure that it remains fit for human consumption. Further steps to reduce our consumption such as redressing our laundry procedures, converting to waterless hand sanitisers in our restrooms and no longer offering jugs of tap water, are also being implemented.”

Meerlust is also fortunate in having a secure supplementary irrigation water supply, largely drawn from the Eerste River, and stored in its unusually large dam – the one with the windmill forlornly in its centre. At present Meerlust (strangely, for a Stellenbosch farm!) uses Cape Town municipal water for the winery and households on the property – it has to be dechlorinated for winery purposes. Also strangely, Cape Town has not (yet?) issued restrictions on agricultural use, as opposed to domestic use, but Chris Williams knows well that supply is far from being secure, and Meerlust must look elsewhere.

“The dam water is not of the required quality,” he says. “Non-conforming water could be filled with a huge variety of problematic bacteria, viruses and pathogens, as well as chemicals which are dangerous to winemaking such as halogens (chlorine, bromide etc), nitrates and other organic compounds which wine spoilage organisms such as yeast, bacteria and moulds could feed on.”

Introducing systems to make the dam water usable in the winery, as well as for domestic purposes if necessary, will be costly. “But at least,” Chris says, “we will be able to process the 2018 harvest.” Let’s hope everyone will, somehow or other.