Some quiz questions about South Africa’s most important wine region: How many wards are there in Stellenbosch? What proportion of Stellenbosch is demarcated into wards? Name the wards. If you’re having trouble with that one, probably Papegaaiberg is one of those you’ve forgotten. Papegaaiberg? On what grounds, literal or otherwise, do you explain little Papegaaiberg? (The other six are Banghoek, Bottelary, Devon Valley, Jonkershoek Valley, Polkadraai Hills and Simonsberg-Stellenbosch; altogether only about 30% of the Stellenbosch district is delimited into wards.) 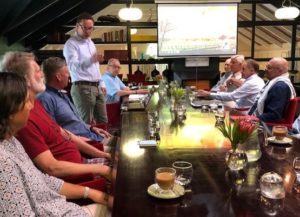 Dutch sommelier Arjen Pleij, a deeply knowledgeable and frequent visitor to the Cape (his restaurant has a remarkably large list of South African wines), scratched his head over Papegaaiberg and wondered a lot about the wards of Stellenbosch in general, and the extent to which they were based on terroir. He couldn’t find out much about the subject – there wasn’t even a proper map showing them for interested visitors. So he started investigating the subject, for the dissertation part of his Magister Vini programme (the most advanced general wine qualification in the Netherlands, much like the local Cape Wine Master).

Arjen presented some of the results of his investigations last week at a seminar at Simonsig, to an audience including a number of Stellenbosch estate owners. His central argument was based on the increased respect for terroir evident in Stellenbosch winemaking, and greater international interest in the details of origin. He himself, he says, is these days tasting more differences in quality and character in different parts of the district.

A “complete overhaul” of the wards is needed, says Arjen. The existing wards should be re-examined, based on a proper understanding of terroir, and the remainder of the district also parcelled into sub-denominations. Helderberg is the obvious area that is known to be distinctive – and is even quite famous – but is not officially demarcated.

Helderberg is also the danger bell that, as the audience well knew, signals the huge problem involved. There is no agreement from the producers vaguely in the area of the mighty mountain’s slopes about just where to draw the boundaries. Even Stellenboschkloof (that valley with Jordan at its furthest end, and which one would have thought was pretty obvious and self-defined) failed to get agreement on what its ward boundaries would be.

This problem occupied most of the discussion that followed the presentation. I think it’s fair to say that all the 20-odd people present agreed that it would be great if the Stellenbosch wards could be redrawn on the basis of an understanding of the elements of physical terroir and the greatly improved scientific tools available to do a terroir-mapping. Although, as Jan Coetzee of Vrienhof said, “it would be a massive task”. (There was some talk about whether many estates would want to use the ward names, at the risk of confusing their largely non-geek customers, who are satisfied with “Stellenbosch” as the named origin on their labels. But that isn’t what the main discussion was about, and didn’t derail it.)

But. Always the big “but” of Winelands politics: how to achieve agreement? There were a couple of allusions to the example Coonawarra in Australia. Around that bit of demarcation some years back there was the sort of infighting (including legal challenges) that there inevitably would be around a meaningful definition of, say, Helderberg. “In or out” is always going to be a problem, in the words of Johan Malan of Simonsig, and no-one disagreed.

The answer seems obvious: leave it up to the experts to draw the boundaries, and impose them from above. However, the Demarcation Committee of the Wine and Spirit Board doesn’t do things in that way (in line with international practice, as far as I know). With no doubt laudably democratic intentions, it will only respond to coherent proposals from groups of producers, which it will then investigate for validity. Duimpie Bayly used to chair that committee, and he was at Arjen’s presentation. He was emphatically opposed to any other sort of procedure, although many of those present pointed out that it would be extraordinarily unlikely that there could be a consensus among producers about putting forward a joint, agreed proposal for a Helderberg ward.

Unfortunately, the current Demarcation Committee had declined an invitation to attend this discussion. We can hope that, at the very least, they will have read Arjen’s dissertation (available in both Dutch and English) and that it will prompt recognition of the major current problem in Stellenbosch, and stimulate some deep thinking about how to solve it.

More questions: Is an overhaul of Stellenbosch’s delimitations under the Wine of Origin Scheme needed? Certainly yes. Is it likely to happen in the foreseeable future? Um, no. But thanks to a Dutch sommelier we have a better understanding of the problem.